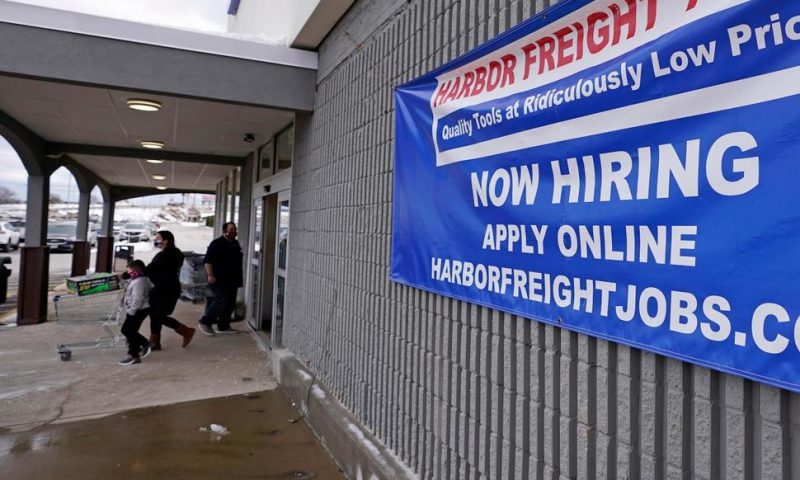 Last week’s total declined from 812,000 the previous week, the Labor Department said Thursday. That figure was revised higher from the previously reported 779,000. The numbers point to a still-elevated number of layoffs. Before the virus erupted in the United States in March, weekly applications for jobless aid had never topped 700,000, even during the Great Recession.

The job market had shown tentative improvement last summer but then slowed through the fall and in the past two months has essentially stalled. In December and January combined, employers cut 178,000 jobs. Nearly 10 million jobs remain lost to the pandemic.

Thursday’s government report also showed a sizable rise in the total number of Americans who are receiving jobless aid, including through extended benefit programs — a sign that long-term unemployment may be growing. All told, 20.4 million people were receiving benefits in the week that ended Jan. 23, the latest period for which data are available. That’s up sharply from 17.8 million from the week before. Part of that increase likely reflects the processing of a rush of claims after the extension of two federal aid programs just after Christmas.

In January, the unemployment rate fell to 6.3% from 6.7%, mostly because more people found jobs. But it also declined because many people who had lost jobs stopped looking for one. The government doesn’t count people as unemployed unless they’re actively seeking work.

Some economists, including former Treasury Secretary Larry Summers, have raised concerns that such a huge spending package would risk igniting inflation by fueling a burst of consumer spending later this year as the virus is gradually brought under control.

Yet on Wednesday, Federal Reserve Chair Jerome Powell underscored the Fed’s focus on the struggling job market and said he thought that any worrisome surge in inflation would be unlikely. If it did arise, Powell said, the Fed has the financial tools it needs to quell inflation. For now, inflation remains below the Fed’s target rate.

“We are still very far from a strong labor market whose benefits are broadly shared,” Powell said.

A driving force behind the Biden administration’s push for more aid is the impending expiration of the extended jobless benefits in barely more than a month. More than 11 million people would lose benefits as a result, according to a report by the Century Foundation. Unlike the previous expiration of extended unemployment aid, which occurred on Dec. 26, the cut-off would be phased in between March 14 and April 11.

The job market won’t likely be close to fully recovered by then. Many economists expect a burst of growth and hiring later this year after vaccines are more widely administered, especially if Congress provides significantly more aid to households, small businesses and states and cities. But that isn’t likely for many months.

Once vaccinations become more widely distributed and administered in the coming months, economists expect growth and hiring to pick up, particularly if Congress provides significantly more financial aid to households, small businesses and states and cities.

“Additional fiscal stimulus and broader vaccine diffusion will eventually allow the labor market to heal,” Oxford Economics said in a note Thursday. “But as the January employment data showed, current conditions are still quite weak and declines in new jobless claims are likely to occur only gradually in the near term.”

Research issued Thursday by the JPMorgan Chase Institute found that supplemental unemployment payments, like the $600 a week that the federal government provided from April through July, helped maintain spending for the unemployed and didn’t appear to reduce their willingness to take jobs.

More than half the recipients who received the extra $600 returned to work before the benefit had expired, the study found. And the likelihood of recipients finding a job didn’t increase when the aid did expire. The report estimates that every dollar of additional benefits boosted spending by unemployed families by between 29 and 43 cents.

About 4 million people who are out of work have stopped searching for jobs and so aren’t even counted as unemployed. Powell said that if these people were counted among the officially jobless, the unemployment rate would be nearly 10%.

Layoffs have also fallen disproportionately on Black workers. In December, 18% of people who sought unemployment aid were black, even though African Americans make up 13.5% of the workforce, according to the Federal Reserve Bank of Atlanta. By contrast, nearly 50% of the applicants were white, even though 77% of workers are white.

Oil futures decline, putting an end to their longest streak of gains in over 2 years