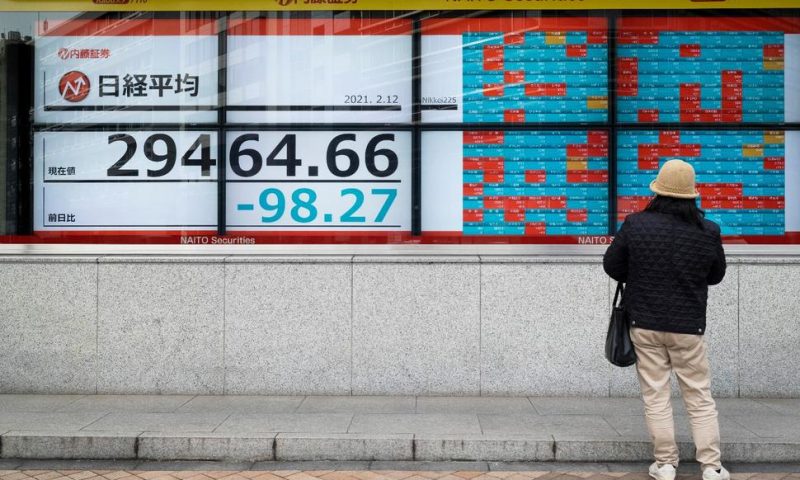 Shares have fallen in Tokyo and Sydney after stocks closed nearly flat on Wall Street, though the S&P 500 and the Nasdaq composite still logged record highs.

Shares fell in Tokyo and Sydney on Friday after stocks closed nearly flat on Wall Street, though the S&P 500 and the Nasdaq composite still logged record highs.

Most Asian markets were closed to mark the Lunar New Year.

Investors remain cautiously optimistic about prospects for a new round of government aid as the economic recovery seemingly stalls.

The latest U.S. government report on jobless claims reaffirmed that employment remains a weak spot in the economy, even as vaccine distribution ramps up in the hopes of eventually ending the pandemic.

Weak economic data are serving to “fog up the glass,” Stephen Innes of Axi said in a commentary.

“Global markets continue to trade mixed echoing that somber data view as participation remains muted, suggesting that investors need a bit more cajoling by more all clear economic smoke signal on the horizon before getting back in the saddle,” Innes said.

Democrats in Congress are working on a potential $1.9 trillion relief package that would include direct payments to people and more jobless aid as unemployment remains stubbornly high.

The number of Americans seeking unemployment benefits fell slightly last week to 793,000. The job market improved somewhat last summer but has slowed since the fall. Nearly 10 million jobs have been lost to the pandemic.

The pandemic and business shutdowns are still hurting many companies and crimping their financial results. Molson Coors fell 9.1% for the biggest decline in the S&P 500 after its profits fell short of expectations because business shutdowns in Europe hurt sales.

Shares of online dating service operator Bumble soared 63.5% on their first day of trading. And cannabis stocks fell broadly a day after surging amid a buying spree fueled partly by members of the same online forum that hyped GameStop and other beaten-down companies in recent weeks.

Aphria and Tilray, Canadian cannabis companies that agreed to combine in December, fell 35.8% and 49.7%, respectively. So far this year, Aphria has more than doubled, while Tilray has nearly quadrupled in value. Sundial Growers fared better, recovering from an early slide to gain 3.1%. It’s price has increased more than six-fold this year.

Shares of Mastercard rose 2.6% after the payment processing company said it would start integrating cyber currencies into its payment network, allowing people to potentially transfer currencies like Bitcoin from customer to merchant. Bitcoin also rose on the announcement, gaining more than 4%, according to the online currency brokerage Coinbase.

In other trading, U.S. benchmark crude lost 47 cents to $57.77 per barrel in electronic trading on the New York Mercantile Exchange. It gave up 44 cents overnight to $58.24. Brent crude, the international standard, shed 43 cents to $60.71 per barrel.

US Jobless Claims Fall Slightly to 793,000 With Layoffs High