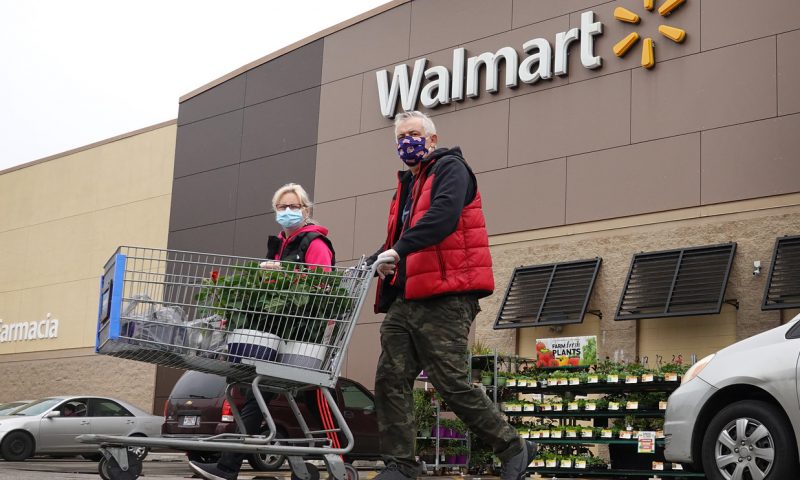 While many Americans have used their stimulus checks to cover basic needs such as groceries, mortgage or rent, there’s evidence people are also spending the money on non-essentials including electronics, clothes and toys, according to major retailers.

“Call it relief spending, as it was heavily influenced by stimulus dollars, leading to sales increases in categories such as apparel, televisions, video games, sporting goods and toys,” Walmart WMT, +0.40% CEO Doug McMillon said during the company’s earnings call Tuesday.

Both Walmart and Target TGT, -2.87% saw increased consumer demand for discretionary goods in mid-April as the stimulus payments from the $2.2-trillion CARES Act flowed into Americans’ bank accounts, the companies’ CEOs said this week. Apple AAPL, +1.94% saw an uptick in demand for its products “across the board,” CEO Tim Cook said April 30.

The different phases of the pandemic have shaped shoppers’ choices. As stay-at-home orders were enacted across the country, “parents became teachers,” McMillon said on the company’s earnings call. “Adult bicycles started selling out, as parents started to join the kids. An overlapping trend then started emerging related to DIY and home-related activities.”

Consumers also bought sewing machines and bandanas to make their own face masks, he said.

Sales took off in mid-April when many Americans began to receive their $1,200 stimulus checks. Within 10 days of receiving their stimulus checks, households spent around one quarter to one third of it, research shows.

Before the checks were issued on April 15, there was “not as much demand” for discretionary goods at Walmart, said spokesman Randy Hargrove, adding that sales took off “towards the end of the quarter.”

Before the checks were issued on April 15, there was ‘not as much demand’ for discretionary goods at Walmart, said spokesman Randy Hargrove

Customers, he said, are “still seeing the benefits of the stimulus check.” People are shopping across all categories including apparel, which has been especially hard hit by the coronavirus-driven economic downturn.

(Costco COST, +0.09% declined to comment on whether it has experienced the same trend in sales related to stimulus payments.)

iPhone maker Apple also saw sales increase after stimulus payments went out, Cook said on the company’s April 30 earnings call. “A part of it is due to just our new products,” Cook said. But another part of it is also “due to the stimulus programs taking effect in April.” (Apple did not respond to MarketWatch’s request for a further comment.)

Unlike Target and Walmart, which have remained open during the coronavirus outbreak and can sell apparel in-stores, “non-esential” clothing stores including Gap GAP, -4.86%, Nordstrom NRD, -4.63% and Nike NKE, +1.57% have been forced to close many stores across the country. As a result, retailers in the apparel industry have offered consumers online deals comparable to Cyber Monday.

Still, many Americans have used their stimulus checks to stock up on essentials. That’s especially true for those who received their checks in the first wave of stimulus payments, said Stuart Sopp, CEO and founder of Current, a New York City-based mobile-banking startup.

In mid-April when payments were initially distributed, “most people immediately spent on groceries,” said Sopp. Many Current members he said also took cash out of ATMs to “pay friends back and pay their bills.” He added, “People were struggling for basic life essentials and the stimulus payments really helped them, which I think is what it was all about.”

In the next wave of payments, which occurred towards the end of April, more people used the funds “for everyday means.” That includes ordering more food delivery and takeout, and gas.

If people do end up receiving a second stimulus check, Sopp predicts most will use the money for the same purposes.