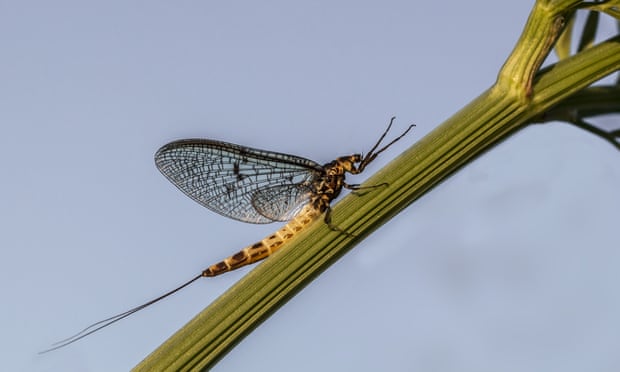 Reductions in air and water pollution are most likely reason, say scientists

Freshwater insects, mosses and lichens are bucking the trend of wildlife losses in the UK and have expanded their ranges since 1970, according to a new study. Reductions in air and water pollution are the most likely reason.

Scientists say their new analysis shows that amid big declines in wildlife, action can help to reverse the trend for some species. The work analysed millions of sightings of 5,000 different invertebrate species by volunteers over 45 years.

The research also found that the average range of insects had increased over that time. This finding does not conflict with other reports of serious declines in insect populations, the scientists said. The new analysis considered only whether a species was present or absent from a site, while the other studies measured falls in abundance and, for example, a population could fall by 90% and still occupy the same range.

The scientists also said much wildlife had already been lost by 1970, which means that date is a low baseline. The pressures on invertebrate life, as well as better studied mammals and birds, include destruction of natural habitats, pollution and pesticides and, increasingly, the impacts of the climate crisis.

“By looking at long-term trends in the distribution of understudied species, we found evidence of concerning declines but we also found that it’s not all bad news,” said Charlie Outhwaite at University College London, who led the new research.

The areas in which freshwater insects, such as mayflies, dragonflies and caddisflies, were found plunged by 47% from 1970 to 1994, but have expanded strongly since and were 7% higher in 2015 than 50 years ago. “That coincides with the implementation of the [EU] urban wastewater treatment directive”, which significantly cleaned up rivers, Outhwaite said.

Mosses and lichens have expanded their average range by 36% since 1970, the study found. “Mosses and lichens are very sensitive to air quality and it seems like they have been improving” since the Clean Air Act in 1956, she said.

“We just don’t have abundance data for [most invertebrate species], especially at a national scale,” she said. “So we’ve had to do the best we can by looking at their range size. But it’s really important we don’t over-interpret it and think everything’s fine.”

The new work, published in the journal Nature Ecology and Evolution, also shows that the ranges of many insect groups in the UK have declined since the mid-2000s. Other research has shown big falls in insect populations since that time, which was when neonicotinoid pesticides were introduced.

“The trends in bees seen in this new study mirror the bee trends found in our 2019 research,” said Gary Powney, at the UK Centre for Ecology & Hydrology, which was not part of the latest work. “The rapid and substantial decline in these pollinators in the late 2000s is a major cause for concern.”

Other groups losing range in the new analysis included spiders and freshwater snails and mussels. The molluscs did not recover after 1994, Outhwaite said, “so something else is driving that change, potentially invasive species”. But fungus gnats and weevils showed strong expansion of their ranges.

Determining the exact causes of changes is difficult, she said: “It’s challenging because you have multiple threats happening at the same time.”

Prof Dave Goulson at the University of Sussex, who was not involved in the new study, said data collected by volunteer recorders had to be treated carefully. “Recorder effort has greatly increased in recent years, along with the publication of new identification books, online guides, recording apps and so on,” he said. “Obviously the more you look, and the more experienced the recorder, the more you will find. The modelling purports to take this into account, but I do not see how.”

The relationship between the range and abundance of species is not clear, Goulson said, although they would be expected to track one another. But the new work suggests range could expand for some species while their abundance falls. “All in all, it’s very puzzling,” he said.

“This kind of data is very messy in terms of biases, like sampling effort over time,” said Outhwaite. “But the models are designed to try to take those into account, so they don’t influence our trends.”

She also paid tribute to the volunteer recorders. “Our study demonstrates the power of citizen science, as anyone can contribute to impactful research. There are over 80 recording schemes in the UK now, so there is definitely something for you if you are interested.”