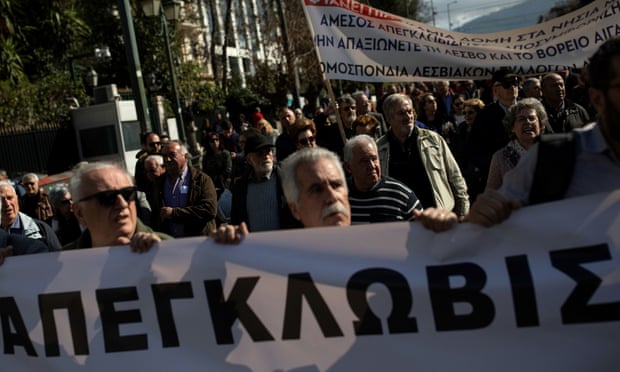 Greece has halted plans to construct new detention centres on outlying islands facing Turkey amid mounting opposition from resident communities who fear they will become permanent.

The centre-right administration announced it would extend talks with regional authorities about replacing “anarchic” open-air camps with closed facilities on the Aegean outposts.

“We will put the requisitions on hold,” the minister for migration affairs, Notis Mitarachi, said on Monday, referring to a government order to appropriate land for the camps. “We will go on talking until Friday this week [with the aim] of coming to a solution.”

Athens hopes the new installations will help ameliorate an increasingly chaotic situation on Lesbos, Samos, Chios, Leros and Kos, where overcrowding in camps has been exacerbated in recent months by a fresh influx of refugees and migrants determined to reach Europe from Turkey. More than 42,000 people are now crammed into camps designed to accommodate 5,400.

“We have asked for €260m in additional EU funding to create the new centres on the islands,” Mitarachi told the Guardian. “There will be five camps – one in Mytilene, one in Samos, one in Chios, one in Leros and one in Kos. The islands asked for emergency measures and this is an emergency measure.”

Five years after the immigration crisis erupted, the latest surge in arrivals has pitted communities on the frontline against policymakers in the capital.

Kostas Moutzouris, the governor of the north Aegean and the region’s most senior official, expressed optimism that the decision to pause would allow dialogue to be relaunched. “We hope this time will help the government understand reality and the wishes of the islanders,” he said, emphasising that Athens’ priority should be the “immediate and comprehensive” decongestion of the islands.

Following its decision to sequester land for the proposed camps, the government has faced protests, roadblocks and threats of legal action from the island communities. On Lesbos, the gateway for close to a million displaced refugees at the height of the Syrian civil war, residents pledged to stop bulldozers beginning construction work. After an announcement that patrols would be set up to guard the land earmarked for the camp, locals bent on voicing their resistance wrote out the word oxi (no) in stones across the plot at the weekend.

“Once again they are asking us to bear the brunt of the problem and that’s unfair,” said Makis Christellis, a marble worker born and raised in Lesbos who joined protesters outside the interior ministry last week. “People are very tired. We want our lives back. It is our view that [immigrants] should be allowed to move on to the mainland and other countries in Europe.”

Not since March 2016, when the EU struck a landmark accord with Turkey to curb arrivals, have migratory flows been as high as at present. In Lesbos, close to 21,000 people are staying in Moria, a holding facility regarded as the worst refugee camp in the world.

On any given day hundreds more people reach the entry points in rickety boats charted by smugglers. Under the EU-Turkey deal, asylum seekers are duty-bound to remain on the islands until their requests are completed. There is a backlog of 90,000 applications.

Mayors highlighting the difficulty of life on the outposts say residents no longer have easy access to healthcare or other services because of the strain on local infrastructure. A surge in petty crime has been reported, further exasperating communities who had once shown extraordinary compassion towards refugees.

The seven-month-old government of the prime minister, Kyriakos Mitsotakis, has been accused of pandering to its hard-right constituency on the issue of migration, but analysts and diplomats say it is stuck between a rock and hard place. “In so many ways it is not in Greece’s hands, it is in Turkey’s hands,” said one former EU ambassador to Athens. “If [the Turkish president Recep Tayyip] Erdoğan decides to open the faucet, he can do so on any given day.”

Mitarachi, the migration minister, who hails from Chios, is acutely aware of the islanders’ fatigue. Echoing international aid organisations that have long pressed for a mass evacuation of refugees from the islands, he described the deteriorating situation as a humanitarian crisis.

“What might not be a crisis for Europe today, or for Greece overall today, is a big issue for five islands,” he said. Asked where he would put the crisis on a scale of one to 10, he replied: “Between a seven and an eight, provided we don’t have a big jump in arrivals, which is very hard to predict.”

Last year one in four would-be asylum seekers entering Europe came though the Greek isles, making them by far the busiest gateway to the continent. Bolstering border patrols, fast-tracking the asylum process and pushing for a common EU migration policy are among other policies the government has announced to tackle the problem.

The new facilities will be designed to accommodate 20,000 people for a maximum of three months. Asylum seekers will be provided with permits to allow them to go out during the day but will be kept under lock and key at night. Anyone accused of violating the law as they wait for requests to be processed will be detained permanently before they are flown back to their home countries.

Human rights groups have expressed alarm, warning that such restrictions smack of detention. But the Mitsotakis government is standing its ground. “We will be deporting those not entitled to protection,” said Mitarachi, adding that Greek authorities would aim to return around 10,000 people annually. “The proposed plan is reducing the people on the islands by more than 50%, which is the most efficient way we have today to mitigate flows, help reduce flows and run the asylum process. What we want is for no one to ever enter the islands again.”

He said one of the biggest difficulties facing Greece was its inability to process asylum seekers off the islands and on the mainland, because if they were rejected then Turkey refused to take them back.

This month riot police used teargas to forcefully break up an otherwise peaceful protest by refugees on Lesbos. Days earlier the government had declared it would forge ahead with another plan, equally controversial, to create a floating barrier to deter people from attempting to get to the islands from Turkey.

With locals now threatening to stop bulldozers moving in to create the new camps, the explosive mood seems set to only get worse in the run-up to spring when ever more people are expected to try to reach Europe via Greece.