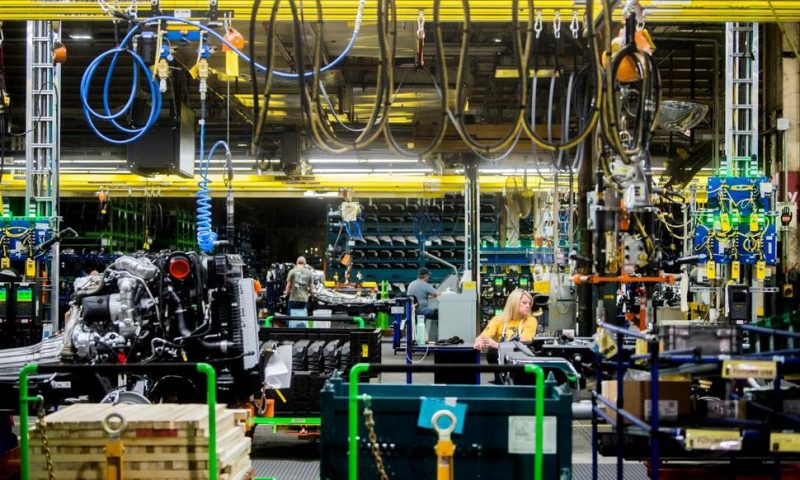 US manufacturing shrinks for first time in 3 years amid trade war, global slowdown.

WASHINGTON — The U.S.-China trade war and slower global growth are weighing on the U.S. economy, reducing factory output in August for the first time in three years.

A survey by the Institute for Supply Management, an association of purchasing managers, on Tuesday showed that factory production and new orders fell sharply last month and are now shrinking. U.S. manufacturers also cut jobs, the survey found. The data has fueled concerns that the broader U.S. economy is weakening.

Other recent data has shown factory output is decreasing in Europe and much of Asia, in large part because of the U.S-China trade fight. That has weakened global demand for U.S. exports. Manufacturing activity is declining in 17 out of 30 countries surveyed by the consulting firm IHS Markit.

More than half of the public comments from companies surveyed by ISM pointed to the economic uncertainty as a drag on their businesses.

The ISM’s manufacturing index slid to 49.1 last month, from 51.2 in July. That’s the lowest reading issued since January 2016. Any reading below 50 signals a contraction in the sector.

While consumer spending in the U.S. has remained strong, the deterioration in U.S. manufacturing could slow job growth and weaken the economy.

Investors were dismayed by the news. Stock prices, which had already fallen at the market’s open, dropped further after the report’s release. The Dow Jones Industrial Average slumped 372 points, or 1.4%, in afternoon trading.

WHAT DOES THIS MEAN FOR THE U.S. ECONOMY?

The report suggested manufacturing will likely continue to struggle, raising concerns among some economists about a recession.

Along with the lower factory production figure, a measure of new orders also fell below 50, a sign that output will likely remain weak in the coming months.

“Another couple of months of declines on this scale would leave the U.S. facing an entirely unnecessary and self-inflicted recession,” Ian Shepherdson, the chief economist at Pantheon Economics, wrote in a research note.

Yet that is not a foregone conclusion. A similar downturn in manufacturing in 2016 didn’t pull the broader U.S. economy into recession.

A sharp drop in oil prices in 2015 and lower prices for many agricultural products caused oil drillers and farmers to cut back the following year on their investment in tractors, machinery and drilling rigs.

That, in turn, lowered output all along the manufacturing supply chain, from steelmakers to heavy equipment companies such as Caterpillar. Business spending plunged and economic growth fell to just 1.6% in 2016, barely half the 2.9% increase the year before.

Similar dynamics are at play now: The trade war is discouraging businesses from investing in new equipment and expanding. Business spending fell in the April-June quarter for the first time since 2016.

But so far manufacturers aren’t cutting back as much as they did then. Factory hiring is holding up better, so far. Back in May 2016, factories actually shed jobs over the preceding 12 months. But as of July, manufacturers had added more than 150,000 jobs in the previous year, though those gains are slowing.

WHAT ROLE HAS THE TRADE WAR PLAYED?

President Trump’s fight with China, and his tariffs on steel and aluminum imports, are intended to help U.S. manufacturers but are now having the opposite effect.

The ISM report was issued against the backdrop of a new round of tariffs on Chinese goods, which began this Sunday. Those tariffs are targeted at consumer goods and will likely raise prices for American consumers. They also point to a trade war that shows little sign of stopping.

Timothy Fiore, chairman of the ISM’s Manufacturing Business Survey Committee, said that the decline in new orders was driven by new export orders, which fell to their lowest since April 2009 when global trade was hit by the financial crisis.

“Tariffs are still weighing heavily on supply managers’ minds as they adjust their supply or manufacturing sources,” Fiore said. “Some industries can do it quickly while others need more time.”

WHAT ABOUT THE GLOBAL ECONOMY?

Surveys of purchasing managers this week have suggested that the uncertainty generated by the trade war has had a global impact.

IHS Markit’s global manufacturing index rose from 49.3 to 49.5 in August, but remained in negative territory.