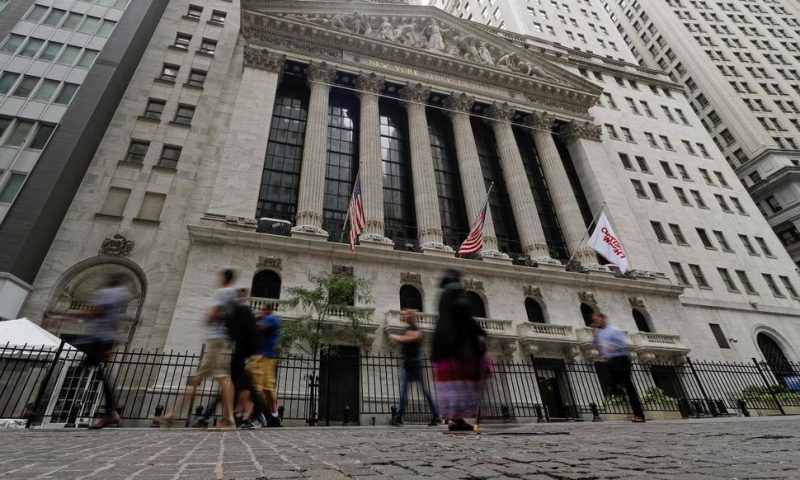 Technology companies drove a broad slide in U.S. stocks Tuesday as disappointing economic data and the latest escalation in the trade war between the U.S. and China put investors in a selling mood.

Technology companies drove a broad slide in U.S. stocks Tuesday as disappointing economic data and the latest escalation in the trade war between the U.S. and China put investors in a selling mood.

The Dow Jones Industrial Average slumped more than 280 points as the market gave back some of its gains from last week. The losses ended a three-day winning streak for the S&P 500.

The sell-off got going as markets opened after a long weekend to expanded tariffs between Washington and Beijing, and little sign that talks would restart soon. New economic data showing that U.S. factory activity shrank in August for the first time in three years helped drive the selling.

“While we’ve known that manufacturing was slowing, and in a slump, this was worse than expected, which is rekindling fears of recession,” said Kate Warne, chief investment strategist at Edward Jones. “While we don’t think recession is on the horizon, certainly it’s one more sign of slower economic growth.”

The worsening trade situation between the world’s two largest economies dragged the benchmark S&P 500 to its second monthly loss of the year in August and dented investors’ confidence in global economic growth.

On Sunday, the U.S. started charging a 15% tariff on about $112 billion of Chinese products. China responded by charging tariffs of 10% and 5% on a list of American goods.

The latest escalation in the lingering trade conflict had been expected since early August when the U.S. announced plans for the new tariff measures, prompting China to retaliate.

Still, stocks fell as investors turned pessimistic that any resolution will be forthcoming in the near future, even as negotiators from the U.S. and China are supposed to meet in September to continue trade talks.

“Today it appears that the two sides aren’t even able to agree on a date, and that’s making investors feel more skeptical that even if there’s a meeting there won’t be any progress,” Warne said.

Technology companies accounted for much of the decline. The sector is particularly sensitive to swings in trade relations with China and tariffs have the potential to drive up costs for gadget and chipmakers. Apple, which relies on China as a key part of its supply chain, fell 1.5%, while chipmakers Nvidia dropped 2% and Qualcomm slid 3.4%.

Industrial stocks were among the biggest decliners. Caterpillar, which is seen as an industry bellwether when it comes to the impact of trade, fell 1.7%.

Utilities held up well, as did makers of consumer products such as Procter & Gamble, which added 0.9%.

The surge in demand for U.S. government bonds came as new U.S. manufacturing data stoked fears of an economic slowdown.

The Institute for Supply Management, an association of purchasing managers, said Tuesday that its manufacturing index slid to 49.1 last month, from 51.2 in July. Any reading below 50 signals a contraction. That’s the lowest for the index since January 2016.

“The trend is not in the right direction and it was worse than expected,” Warne said.

A global softening in demand, worsened by the increasingly high-risk trade war between the U.S. and China, appears to be hurting American manufacturers. More than half of the public comments from companies surveyed by ISM pointed to economic uncertainty as a drag on their businesses.

Businesses are increasingly wary of investing and expanding because of uncertainty surrounding the U.S.-China trade dispute.

Investors have been worried that the trade war and a slowing global economy could tip the U.S. into a recession. The bond market has been reflecting these fears, with long-term bond yields falling below short-term ones, a so-called inversion in the U.S. yield curve that has correctly predicted previous recessions.

The yield on the 10-year Treasury has been hovering near or below that of the 2-year Treasury yield, which on Tuesday dropped to 1.46% from 1.49% late Friday.

In overseas trading, European stocks declined amid worries that the U.K. faces a potentially chaotic exit from the European Union. Prime Minister Boris Johnson’s office said he would call an early election if his opponents pass legislation that would block his plans to leave the European Union by an Oct. 31 deadline.

Walmart to Stop Some Ammo Sales, Ask to Not Open Carry Guns