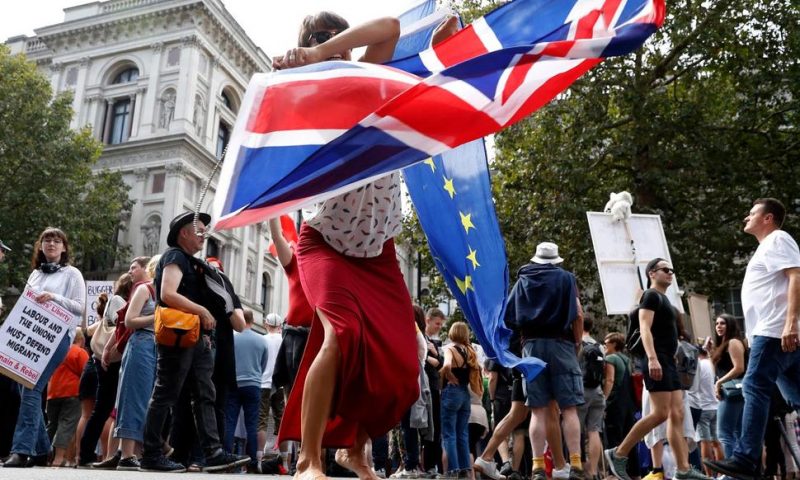 The pound has touched its lowest level against the dollar since 1985, excluding a brief “flash crash” in 2016 that may have been caused by technical glitches.

LONDON — The pound on Tuesday touched its lowest level against the dollar since 1985, excluding a brief “flash crash” in 2016 that may have been caused by technical glitches, as international investors fret over a political showdown over Brexit this week.

The British currency fell as low as $1.1960, down almost a cent on the day before recovering somewhat to $1.2060. Not counting the brief plunge in the autumn of 2016, in which the currency fell to $1.1789 for about two minutes before bouncing back, the pound on Tuesday touched its lowest point in 34 years.

Brexit is facing a crucial few days as lawmakers challenge Prime Minister Boris Johnson’s insistence that the U.K. will leave the European Union on Oct. 31 even without a deal.

Parliament is returning from its summer recess Tuesday with a key piece of legislation on its agenda that would see it take control of the Parliament’s agenda. If that passes, the lawmakers are expected to vote to block the government from bringing the country out of the EU without a deal, which many experts say would cause chaos for people and businesses as border checks and tariffs resume, among other things.

Johnson has tried to crack down on members of his Conservative Party who oppose his Brexit plans, warning them they would be expelled from the party if they supported parliamentary efforts to block or delay Brexit. Johnson’s office also says he would call an early election, with uncertain consequences.

“Markets are extremely negative about the consequences of a no-deal scenario,” said Alex Kuptsikevich, analyst at online brokerage FxPro. “The pound will have a hard time if the (lawmakers’) initiatives fail.”

The pound has become the main indicator of international investors’ confidence in Britain’s economy. Its fall effectively makes British people poorer as they can spend less on travel and foreign goods, which become pricier.

But it also helps British exporters as well as the many multinationals that are based in the country but make most of their money in other countries and currencies. Oil companies like Shell and BP make their money in dollars around the world, converting that back to pounds when they report earnings, so the pound’s drop is generally a boost to them. It’s a similar story for global bank HSBC, mining firms Antofagasta and Rio Tinto and consumer goods producer Unilever.

That’s why the main stock index, the FTSE 100, has actually held up well in the face of the Brexit chaos. While the pound is down almost 7% this year, the stock index is up 8%. Stocks focused on Britain’s own economy, however, have fared more poorly.

The fall in the pound can also make British companies more vulnerable to takeovers from abroad as they effectively become cheaper to buy. Foreign takeovers of British companies jumped after the June 2016 Brexit referendum, when the pound fell around 10% in a day from over $1.500. They have increased again this year as the pound slipped again.