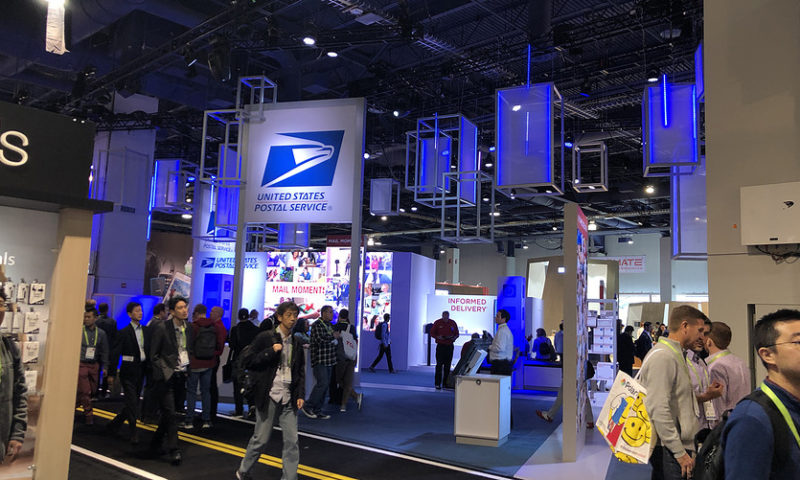 As the U.S. government shutdown was about to become the longest on the record and many employees missed their paychecks Friday, U.S. Postal Service workers were roaming around a Las Vegas convention center hocking a smart mailbox.

The post office has been exhibiting at CES, the largest annual tech conference, for nearly two decades, including at the 2019 show, where the national mail carrier showed off its “Informed Delivery” system, an online service and app that lets registered users view grayscale images of incoming letters before they are delivered to their mailboxes. The agency also showed off a “connected home mailbox” capable of providing “capacity alerts” and delivery notices.

An announcer speaking on a microphone encouraged visitors to stop by the booth and check out the smart mailbox that “turns the conventional home mailbox into a smart device” and represents “the future of mail delivery.” She told business attendees that they could come by and learn more about ways to reach their customers. The post office exhibited in a vast booth featuring large digital displays as well as a joystick-enabled game that let users navigate a maze of virtual packages and try to accumulate the most before time expires.

The USPS is not an arm of the federal government so it is not subject to the shutdown, though it is overseen by federal appointees and officials. It is also subject to Freedom of Information Act laws, and MarketWatch obtained more than 600 pages of documentation regarding the agency’s 2018 visit to CES through the law.

USPS sent more than 70 employees to CES in 2018, at a cost of nearly $200,000, according to MarketWatch calculations based on documents obtained through a Freedom of Information Act request. These employees ranged from sales and marketing personnel to those focused on information-technology support and the Informed Delivery product.

Not included in the FOIA records received by MarketWatch were figures pertaining to how much the agency spent on the construction and design of its booth nor how much it paid the Consumer Technology Association, which runs CES, for space on the show floor. Costs vary widely for booth space at CES, and the CTA didn’t return a MarketWatch request for comment regarding the price USPS paid this year for its booth or the cost of a similarly sized space in South Hall.

The amount USPS pays to exhibit at the conference will be multiplied over several times by the end of the year as the agency heads to more events. A 2017 post on the USPS website says that the agency attends about 60 trade shows and estimates a return on investment of “about 4,000 percent” for its overall efforts with trade shows.

An agency spokeswoman declined to comment on the estimated return on CES specifically nor the amount of money spent on the agency’s presence at this year’s CES.

“We attend trade shows to promote our shipping capabilities in the rapidly growing e-commerce market and to promote our direct mail services in the highly competitive advertising market,” she said, adding that the agency has “a long and proud history of innovation.”

The post office saw its revenue rise 1.5% in the fiscal year ended last September, to $70.6 billion, though the agency’s losses swelled by 43%: USPS reported a $3.9 billion net loss for the fiscal year. The controllable loss, which excludes pension- and compensation-related expenses, widened to $1.9 billion from $814 million a year earlier.

The agency declined to comment on its annual marketing budget.

According to the documents, it appears that the USPS employed a Chicago-based marketing company called Czarnowski Display Service Inc. to assist with the exhibit in Las Vegas. The post office did not release the contract in the FOIA records for the 2018 show and MarketWatch was unable to locate a dollar figure in the documents. The records did not include the costs for the post office’s booth, but did indicate that it was roughly 80 feet by 50 feet in size.

Czarnowski Display lists its 2015 work for USPS at CES as a “case study” on its website, noting that the exhibit that year was named by FindTheBest.com in an article titled: “The 20 Most Eye-Catching Booths at CES 2015.” That booth included a “package memory game,” according to the case study.

Hitachi to decide on fate of UK nuclear plant