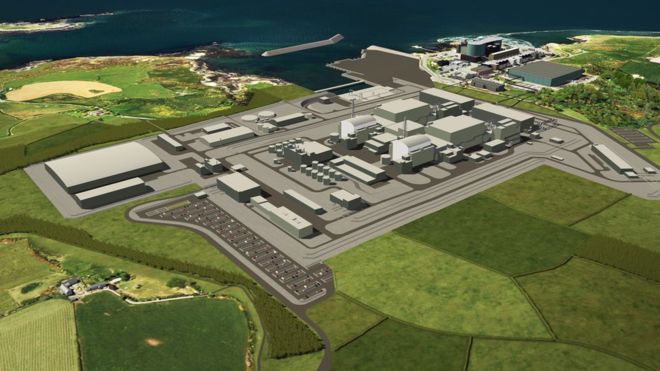 The UK government’s nuclear policy is under renewed scrutiny as the firm behind a £20bn reactor in Wales looks set to halt construction.

The company says no formal decision has yet been made.

But if the project is scrapped, it will cost 400 jobs and leave the Hinkley Point power station in Somerset as the only new UK reactor still being built.

In November, plans to build a nuclear power station at Moorside in Cumbria were halted after Toshiba announced it was winding up its NuGeneration subsidiary, which was behind the project.

The government continues to stress that it is still in talks with Hitachi about Wylfa.

A spokesperson for the Department for Business, Energy and Industrial Strategy (BEIS) said: “Negotiations with Hitachi on agreeing a deal that provides value for money for consumers and taxpayers on the Wylfa project are ongoing.

“They are commercially sensitive and we do not comment on speculation.”

The latest developments are likely to force the government to sweeten future nuclear plant deals for potential investors, in what one expert has called a “desperate leap in the dark”.

Energy Secretary Greg Clark has already suggested that regulated asset base (RAB) funding could be used for nuclear projects in future.

The method, which has already been used for other infrastructure schemes including the £4.2bn Thames Tideway “super-sewer”, allows investors to receive returns before the projects have been completed.

It also allows the Treasury to keep the costs off its books by recouping the investment from consumers’ bills rather than through direct taxation.

A BEIS spokesperson said on Sunday that it remained the government’s objective in the longer term that new nuclear projects, like other energy infrastructure, should be financed by the private sector.

The spokesperson added: “Alongside our discussions with developers, we will be reviewing the viability of a regulated asset base model as a sustainable funding model based on private finance for future projects beyond Wylfa, which could deliver the government’s objectives in terms of value for money, fiscal responsibility and decarbonisation.”

However, Robat Idris, from campaign group People Against Wylfa B, said: “We have warned for several years that the case doesn’t stack up financially.

“It’s time to go back to the drawing board. It’s time for the local politicians to abandon this ridiculous dream that they’ve had.”

One economist, Prof Dieter Helm of Oxford University, has said RAB funding could work if it is properly regulated.

In an analysis of the model, he wrote: “The RAB approach is… probably inferior to the direct procurement route, but the latter is ruled out by the Treasury-imposed constraints.

“The RAB model is a second-best, but much better than the Hinkley-style contract.”

He told the BBC that nuclear power plants could not be built without “vast” public subsidies and that RAB funding was merely “a fiscally dextrous form of subsidy”.

He added: “It’s never been tried for projects as technically complex as nuclear power that take about a decade to build.

“It really looks as if the government are flailing. It’s a last desperate leap in the dark.”

Both Prof Helm and Prof Dorfman take the view that the UK has various possible ways of satisfying its future energy needs.

Prof Helm says that nuclear faces “deep challenges”, adding: “It is for society to decide whether it wants new nuclear or not. The market cannot decide.”

For Prof Dorfman, renewable energy is now “cost-competitive with fossil fuels” and offers “a cheaper and better way forward”.