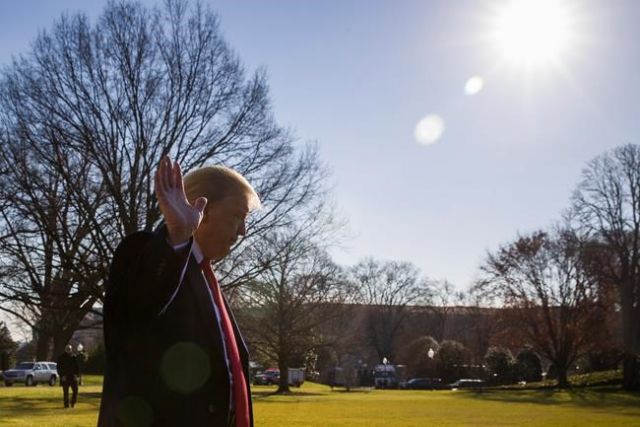 Trump showed no signs of budging on his demand for more than $5 billion for a wall along the U.S.-Mexico border, though on Sunday he did offer to build it with steel rather than concrete, a concession Democrats panned.

With the shutdown lurching into a third week, many Republicans watched nervously from the sidelines as hundreds of thousands of federal workers went without pay and government disruptions hit the lives of ordinary Americans.

White House officials affirmed Trump’s funding request in a letter to Capitol Hill after a meeting Sunday with senior congressional aides led by Vice-President Mike Pence at the White House complex yielded little progress. The letter from Office of Management and Budget Acting Director Russell Vought sought funding for a “steel barrier on the Southwest border.”

The White House said the letter, as well as details provided during the meeting, sought to answer Democrats’ questions about the funding request. Democrats, though, said the administration still failed to provide a full budget of how it would spend the billions requested for the wall from Congress. Trump campaigned on a promise that Mexico would pay for the wall, but Mexico has refused.

The letter includes a request for $800 million for “urgent humanitarian needs,” a reflection of the growing anxiety over migrants travelling to the border — which the White House said Democrats raised in the meetings. And it repeats some existing funding requests for detention beds and security officers, which have already been panned by Congress and would likely find resistance among House Democrats.

Trump sought to frame a steel barrier as progress, saying Democrats “don’t like concrete, so we’ll give them steel.” The president has already suggested his definition of the wall is flexible, but Democrats have made clear they see a wall as immoral and ineffective and prefer other types of border security funded at already agreed upon levels.

House Speaker Nancy Pelosi intends to begin passing individual bills to reopen agencies in the coming days, starting with the Treasury Department to ensure people receive their tax refunds. That effort is designed to squeeze Senate Republicans, some of whom are growing increasingly anxious about the extended shutdown.