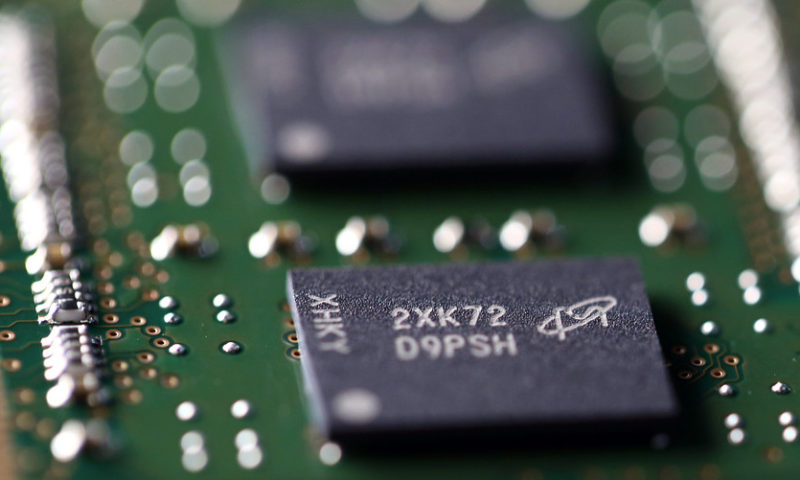 Opinion: Some factors could be pointing to either a downturn or a brief blip

Micron Technology Inc. has skyrocketed in the past two years as price hikes in memory chips have helped its business soar to new heights, but its latest forecast created fears that the party is coming to an end.

On Thursday, investors got jittery that the boom cycle may be winding down, with the company giving a lower-than-expected forecast for the fiscal first quarter. Micron said it expects revenue in the range of $7.9 billion to $8.3 billion, and earnings per share ranging from $2.88 to $3.02. According to FactSet, the consensus on Wall Street was earnings of $3.08 a share on revenue of $8.45 billion.

One of the factors is the recent batch of tariffs announced against Chinese goods by the Trump administration. Micron expects its gross profit margins will take a slight hit near-term as a result of the $200 billion in tariffs that will be imposed on Chinese goods starting Monday. Micron, based in Boise, Idaho, has an assembly plant in China, where its memory modules are assembled.

In addition, Micron said some computer makers appear to be making “inventory adjustments,” i.e., cutting back on buying more memory chips for now, because of a shortage of certain central processing units. It did not identify Intel Corp. INTC, -0.11% by name, but Intel is currently having manufacturing issues and is not able to meet the current demand for its PC processors.

Micron MU, -3.93% shares tumbled during the company’s earnings call Thursday, after it disclosed its forecast. After rising 12% so far this year compared with a nearly 10% gain in the S&P 500 SPX, +0.78% Micron stock fell about 7% in after-hours trading.

A few analysts asked about Micron’s plans to increase capital spending on its manufacturing plants, while its two biggest rivals were slowing down their spending. Last week, semiconductor equipment maker LAM Research Corp. LRCX, -0.85% told analysts on its earnings call about lower spending on new equipment by some of its memory customers, causing its shares to fall.

Since the latest round of tariffs were proposed by the Trump administration, the semiconductor industry and other tech sectors have been warning that they would hurt profits, lead to higher prices and affect the ability of individual companies to invest in research and development.

Eric Ross, chief investment strategist at Cascend Securities, said that some investors are nervous that the boom cycle in memory chips could be nearing its end, and that Micron is not seeing it.

“Micron, in the last downturn, didn’t see it coming, they guided kind of up and it ended up being not a total disaster, but definitely bad,” Ross said. “They didn’t see it coming, although I would argue that things are a little bit different now.” He added that end demand for DRAM (dynamic random access memory) is still very good, especially in the server market, and there’s still some demand in PCs. “From what we see, end demand looks very good,” he said, adding that the demand for NAND flash memory, though, is not as strong, with pricing declining in the industry overall.

But investors in memory chips are always on edge, trying to look around the corner for the next downturn, especially after such a long boom run this time around. Micron’s forecast could either be the first indication of an industry down cycle, or a temporary blip, but some don’t want to wait to find out.

Freezing your credit is now free

How much is too much?