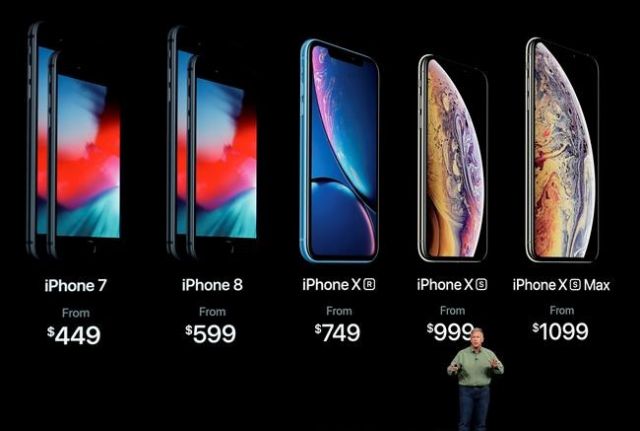 The $1,100 price tag on Apple’s latest iPhone turned heads when the company announced it last week. But for less than half as much, you can still get a good camera, a decent-sized screen and other popular features.

That phone was Apple’s first to come with water resistance and its first to lose the standard headphone jack. Its 4.7-inch screen is adequate and on par with other smartphones, even though its resolution falls short of high definition. And the phone still has a fingerprint sensor and a home button, both of which have vanished in the latest iPhones.

Or, if you want to pay more for wireless charging, there’s the iPhone 8. An edge-to-edge screen? You’ll need the upcoming budget iPhone XR or one of its more expensive siblings. And if you want a supersized display, that’s where the $1,100 iPhone XS Max comes in. That model and a smaller version start selling in the U.S. and several other countries on Friday.

If you’re shopping for a new phone, it pays to think hard about what you really want and what you’re willing to pay for it. Improvements over the previous generation tend to be incremental, but can add up over time — and so do the sums you’ll pay for them.

Here’s what to consider if you’re thinking of bargain-hunting in the iPhone history bin.

The big jump in iPhone cameras came a generation earlier with the iPhone 6S, when Apple went from 8 megapixels to 12 megapixels in resolution. With the iPhone 7, the front camera goes from 5 megapixels to 7 megapixels, so selfies don’t feel as inferior. Headphones go into its Lightning port, which is used for both charging and data transfer. It’s a pain when you want to listen to music while recharging the phone. For that, you need $159 wireless earphones called AirPods. Apple no longer includes an adapter for standard headphones; one will set you back $9 if you need it.

This larger version of the iPhone 7 has a second camera lens in the back, allowing for twice the magnification without any degradation in image quality. It also lets the camera gauge depth and blur backgrounds in portrait shots, something once limited to full-featured SLR cameras. The dual-lens camera alone is a good reason to go for a Plus, though the larger size isn’t a good fit for those with small hands or small pockets.

New colour filters in the camera produce truer and richer colours, while a new flash technique tries to light the foreground and background more evenly. Differences are subtle, though. The year-old model, similar in size to the iPhone 7, restores a glass back found in the earliest iPhones. That’s done so you can charge it on a wireless-charging mat, which also solves the problem of listening to music while charging. But with more glass, it’s even more important to get a case and perhaps a service plan.

Again, the Plus version has a larger screen and a second lens. For those shots with blurred backgrounds, a new feature lets you add filters to mimic studio and other lighting conditions.

As with the iPhone X it replaces, the new XS has a display that largely runs from edge to edge, getting rid of the surrounding bezel along with the home button. Many tasks now require swipes rather than presses. The fingerprint ID sensor is replaced with facial recognition to unlock the phone. The display has about the same surface area as the iPhone 7 Plus and 8 Plus, while the phone itself is only slightly larger than the regular iPhone 7 and 8. Improved display technology means vivid colours and better contrasts, including black that is black rather than simply dark. You also get a dual-lens camera and software improvements for regular shots.

This is essentially the “Plus” version of the iPhone XS. The phone itself is about the size of the Plus, but with more room for the display. This phone won’t feel big for existing Plus users, but think twice if you have small hands or small pockets.

Consider waiting a month for the iPhone XR. Its display lacks the vivid colours, contrast quality and resolution of the XS, but the price tag is nicer at $749. As with the XS models, you’ll get an edge-to-edge screen to minimize wasted space. There’s more display than the regular XS, but the phone itself is also larger — just not as large as the Max. The XR won’t have the dual-lens camera, though Apple says it can offer the blurred-background effect with software.

Apple quietly discontinued the iPhone SE , which is essentially a three-year-old iPhone 6S, packed in a body that’s smaller but thicker than the iPhone 7 and 8. Though the trend in phones has been to go bigger, some people preferred the smaller size — and the $350 price tag. Apple no longer sells it, though you can get it from some wireless carriers and other retailers, at least for now.

ALL IN THE MEMORY

If you get an SE, 7 or 7 Plus, consider spending another $100 to quadruple the storage. Those phones come with a paltry 32 gigabytes, just half of what’s standard these days. If you don’t upgrade, you risk filling up your phone quickly with photos, video, songs and podcasts.

TSX up on energy stocks