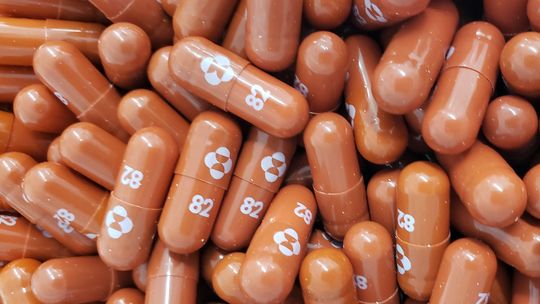 Critical information for the trading day

The buzz surrounding the potential for the antiviral drug from Merck & Co. MRK, -0.43% and Ridgeback Biotherapeutics is hot enough that already there’s political debate for who is to blame for the medication not being available sooner.

That buzz, however, is notably absent in the world’s financial markets. Granted, the Phase III trial showing molnupiravir reduced the risk of hospitalization or death by approximately 50% for patients with mild or moderate COVID-19 has boosted the stock of Merck by as much as 11%, but the broader market reaction hasn’t been great.

Two plays on reopening — the Invesco Dynamic Leisure and Entertainment PEJ, +1.03% and the U.S. Global Jets JETS, +0.84% exchange-traded funds — each saw one-day bounces before drifting, with the airlines ETF now lower since the news. Likewise, the Nasdaq Composite COMP, -0.14%, which has benefited from the stay-at-home trend, also has more or less stayed in place.

Analysts at Man Group, the U.K. hedge-fund operator, noted licensing agreements with Indian generic drugmakers for molnupiravir are already in place, and that other pharmaceuticals are working on their own oral treatments.

“In our view, this development has great potential to fully reopen the global economy. At $700 per course, it is not cheap, but is far cheaper than the cost of hospital treatment. Likewise, because it specifically targets those patients who are most at risk, the drug is likely to lessen the political cost of reopening, leaving the level of infections unchanged but massively reducing hospitalizations and deaths,” said James Terrar and Ed Cole in a note.

Minutes from the last Federal Open Market Committee meeting are due at 2 p.m.

Apple AAPL, -0.91% is cutting iPhone 13 production goals because it can’t get enough microchips from suppliers Broadcom AVGO, -1.43% and Texas Instruments TXN, -2.53%, according to Bloomberg News.