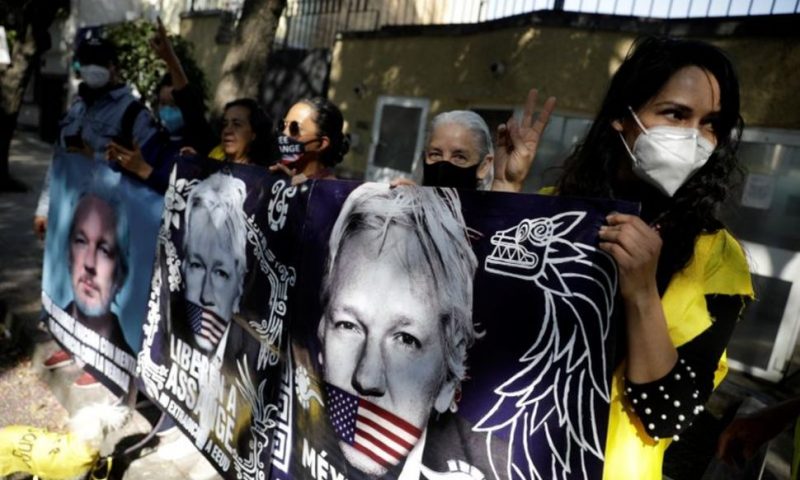 Celebrating a decision by a British judge on Monday to deny a request to extradite Assange to the United States, Lopez Obrador said he wanted his foreign minister to ask Britain if it could release Assange so Mexico could offer him asylum.

“Assange is a journalist and deserves a chance,” he said. “We’ll give him protection.”

U.S. authorities accuse Assange of offenses during the administration of former President Barack Obama relating to the release by WikiLeaks of confidential U.S. military records and diplomatic cables which they say put lives at risk.

Although the Obama administration opted not to prosecute Assange, Lopez Obrador’s offer drew criticism as an undiplomatic gesture given that Obama’s former vice president Joe Biden is about to assume the U.S. presidency.

Lopez Obrador has said he expects to have good relations with Biden as president. Still, he upset Democrats by waiting weeks to recognize Biden’s election victory over Republican President Donald Trump.

The British judge denied the U.S. extradition request on the grounds that Assange’s mental health problems made him a suicide risk. U.S. prosecutors are set to appeal the ruling.

A leftist who took office two years ago, Lopez Obrador has long railed against ruling elites. Casting his presidency as a radical departure from establishment politics, he has previously spoken out on behalf of Assange, 49.

His asylum offer sent a message that Mexico would pursue an independent foreign policy under the next U.S. government, a Mexican official said, speaking on condition of anonymity.

It could also encourage Lopez Obrador to position himself as a champion of free speech, deflecting criticism that he uses his morning conferences to pillory adversaries.

Former Obama official Feierstein said it was ironic that Lopez Obrador regularly attacked Mexican journalists for trying to hold his government to account, and was now supporting one who had worked with hackers to embarrass the United States.

In November, a senior Mexican official said 2020 was the most violent year for journalists in Mexico in at least a decade, with 19 murdered.