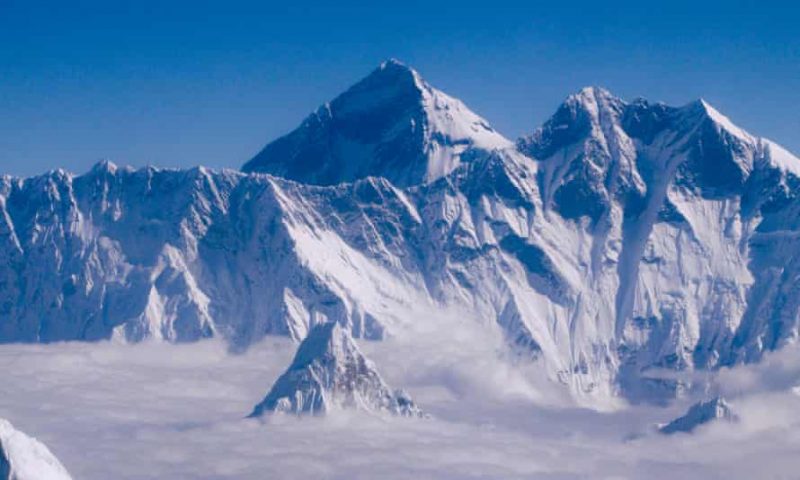 Countries have settled on 8,848.86m – higher than either’s previous measurements

Mount Everest is marginally higher than previously thought, according to a new joint Chinese-Nepali calculation that settles a long-running conflict over the height of the world’s tallest peak, which straddles the countries’ shared border.

Kathmandu and Beijing had differed over its exact height, but after each sent an expedition of surveyors to the summit they have agreed that the official height is 8,848.86 metres (29,032ft), a bit more than their previous calculations.

Nepal previously relied for its measurement on an estimate of 8,848 metres made by the Survey of India in 1954, which included snow lying in the rock summit pyramid. This was for a long time regarded as the “official” height.

Everest is named after the colonial-era British surveyor George Everest, who never actually saw it. The new measurement will have little practical impact. K2, the world’s second highest mountain, is 237 metres lower.

The reason why the newly agreed figure may be temporary is because the 2,900km-long Himalayan chain is located on, and was formed by, the uplift caused by the colliding Indian and Eurasian tectonic plates, which are continuing to push up the Himalaya at an average of 1cm every year.

Nepal, which is home to another seven of the world’s 14 highest peaks, sent its first team of surveyors in May last year to measure Everest. Government officials told the BBC eight years ago that they felt under pressure from China to accept the Chinese height and therefore they had decided to go for a fresh measurement to “set the record straight once and for all”.

Chinese surveyors then climbed the peak in spring this year, when the mountain was closed by both countries for other climbers due to the coronavirus pandemic.

Damodar Dhakal, spokesman for Nepal’s department of survey, said the Nepali surveyors had used the Global Navigation Satellite System to get “the precise height” of the giant peak.

Everest is an “eternal symbol of … friendship between Nepal and China”, said the Nepali foreign minister, Pradeep Kumar Gyawali, announcing the findings of their surveys on a video call with his Chinese counterpart, Wang Yi.

Both countries sent teams to climb the mountain using GPS and also trigonometry to make the final calculations.

“Once the surveyor’s beacon had been placed on the summit, surveyors at stations around the summit measured the distance from the six points to the beacon, which meant at least six triangles could be calculated to determine the mountain’s height,” Jiang Tao, associate researcher at the Chinese academy of surveying and mapping, told the state-run China Daily.

Previously mountaineers had suggested a 7.8 magnitude earthquake in 2015 which killed nearly 9,000 people in Nepal might have altered the height of Everest.

George Everest, who had surveyed the Himalayan region as Britain’s surveyor general of India, in reality had little direct connection to the mountain, which was named after him at the behest of Royal Geographical Society.

Instead, Andrew Waugh, a surveyor general, was the first to suggest the mountain was the world’s highest, and not Kanchenjunga, which was previously assumed to be the highest.

Everest’s status was later confirmed by the 19th century Indian mathematician and surveyor Radhanath Sikdar based on unfinished calculations by another surveyor, James Nicholson, who used a theodolite to measure it.