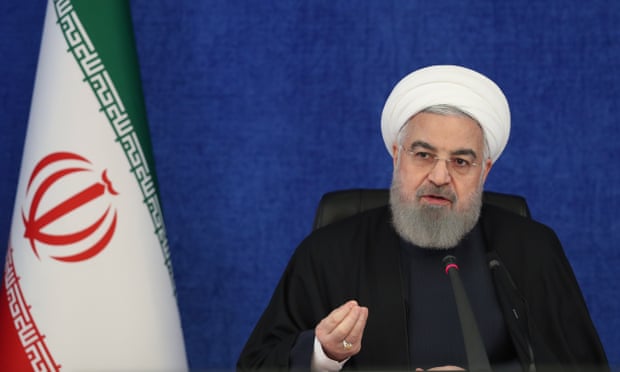 Iran’s president, Hassan Rouhani, said on Wednesday it would be easy to solve the country’s problems with the US so long as Joe Biden stuck to the commitments he made on the campaign trail.

Rouhani’s optimistic remarks to a weekly cabinet contrasted with a speech the day before by the supreme leader, Ayatollah Ali Khamenei, which sketched out a more difficult path to normalisation and the lifting of sanctions.

But Rouhani, who negotiated the nuclear deal with the Obama administration in 2015, insisted complexities around a fresh negotiation would not occur as long as Bidenthe US president elect, stuck to his commitments.

Rouhani said it was “easy to resolve the issue” provided the US government adhered to mutual respect, distanced itself from the record of Donald Trump, and provided compensation for the impact of sanctions on the Iranian economy. The issue of compensation could prove difficult for the Biden administration, depending on the sums demanded.

Khamenei, by contrast, said “the path to lifting sanctions and years of negotiations” had not been concluded, adding that there was not “likely to be a quick opening from abroad”.

The contrast may reflect real policy differences or simply Rouhani’s desire to justify signing the nuclear deal, a decision that has fed his political enemies and will feature heavily in the presidential elections in June.

Early progress in the talks between the US and Iran is likely to help reformist candidates if that progress is tangible within Iran by the time the presidential campaign starts. The supreme leader can in effect vet all the candidates.

Rouhani said: “The reason behind Trump’s failure was his wrong foreign policies, wrong health policies and racist military action. He was unreliable to everyone and continued his demagogic and populist behaviour, and thank god that the American people and the people of the region are ridden of this evil … He didn’t even allow $5bn in international aid to reach Iran to fight the coronavirus.”

He added: “We hope that the next US government will clearly condemn Trump’s policies against Iran and make up for the incorrect policies implemented by the former US government in the past four years.”

He vowed that Iran would take reciprocal measures regarding any steps taken by the US government. If the new rulers in the US were determined to decrease tensions and respect the Iranian nation and international undertakings the “resolution of the problem is very easy and Iran and the US can decide to return to the conditions of 20 January 2017 [the date of Trump’s inauguration]”. He added: “The main knots could be untied by determination.”

He portrayed Trump’s defeat as a victory for Iranian resistance. “One of the manifestations of Iran’s victory and the enemy’s definite defeat in the economic war between the two countries was the end of the era of Trumpism.

“I thank the Iranian people for their three-year resistance in the economic war. In Iran we’ve had two sacred defences, one against Iraq and the other against the Trumpists.”

Iran and the US do not have direct diplomatic ties, but a nuclear deal agreed between Tehran, Washington and other world powers in 2015 – negotiated when Barack Obama was in the White House, with Biden as his deputy – saw bilateral tensions dissipate to the lowest level in decades.

Trump unilaterally withdrew the US from that pact in May 2018 and launched a “maximum pressure” campaign against Iran with sanctions that plunged its economy into a deep recession.