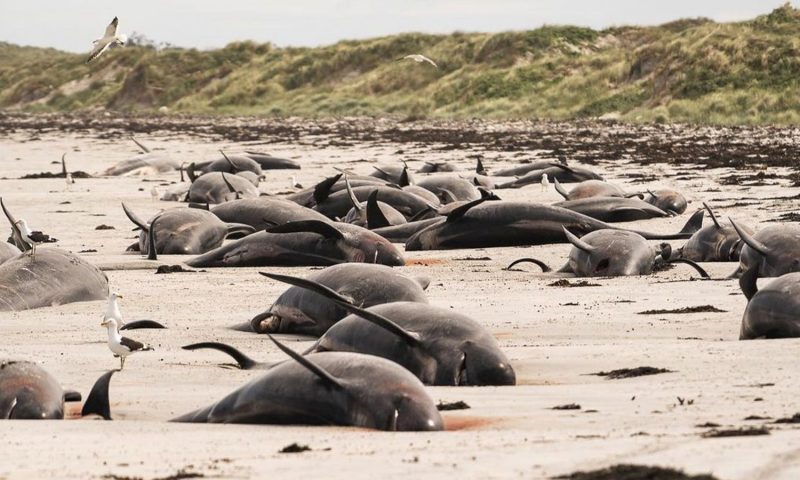 When officials arrived at the scene at Waitangi West Beach, just over a quarter of the stranded whales were still alive but weak.

A mass stranding has left almost 100 whales dead on the remote Chatham Islands in the Pacific Ocean.

Rescue efforts to save them were hampered by the location of the island, which is about 497 miles (800km) off the east coast of New Zealand.

A total of 97 pilot whales and three dolphins died in the stranding, which was first reported to New Zealand’s Department of Conservation (DOC) at 12.30pm on Sunday.

When officials arrived at the scene at Waitangi West Beach on Chatham Island nearly three hours later, just over a quarter of the stranded whales were still alive, although very weak.

Officials said a power outage had also made it difficult to contact people as part of the rescue operation.

DOC Biodiversity Ranger, Jemma Welch, said: “Only 26 of the whales were still alive at this point, the majority of them appearing very weak, and were euthanised due to the rough sea conditions and almost certainty of there being great white sharks in the water which are brought in by a stranding like this.”

Two whales became stranded and were euthanised on Monday when a team of DOC staff made a follow-up visit to the site.

A ceremony was later held to honour the spirit of the whales, which will be left to decompose naturally.

Incidents like this are not uncommon on the Chatham Islands with up to 1,000 animals dying in a single stranding in 1918.

Mass whale strandings have occurred throughout recorded modern history and why it happens is a question that continues to puzzle marine biologists.

In late September, several hundred whales died in shallow waters off the Australian coast in one of the world’s biggest mass whale strandings.

UK Cuts Overseas Aid After Worst Recession in Over 300 Years

Iranian president upbeat about relations with Biden-led US