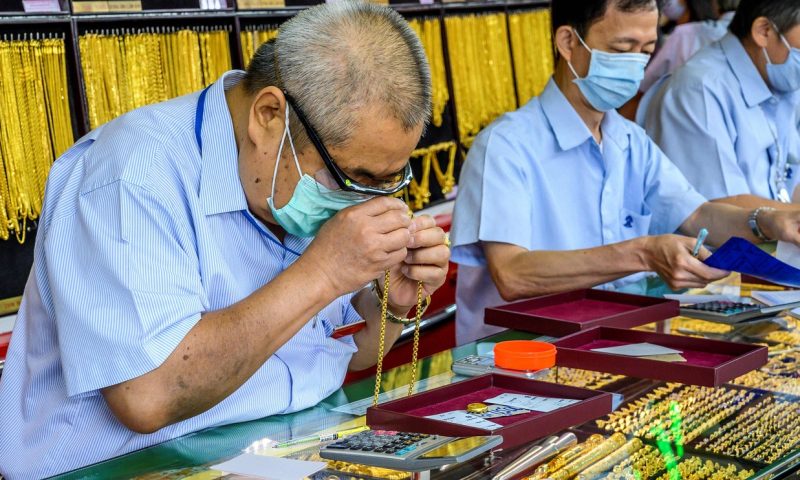 Gold prices posted their first loss in three sessions on Thursday, with the yellow metal marking its lowest finish in more than a week as investors weighed some signs of improvement in the latest economic data.

“The economic data out of Europe and the U.S. [have] confirmed that a bottom is in place,” so traders have “started to shave some profit ahead of a weekend,” said Naeem Aslam, chief market analyst at AvaTrade.

“However, it’s important to keep in mind that the economic activity isn’t likely to return to previous level rapidly— this isn’t a light switch,” he told MarketWatch. “We still have a difficult path ahead and central banks are going to make sure they continue to provide as much support as they can.”

The 2.4 million figure is “terrible,” but “amidst that misery, there is some hope: the number of people filing claims fell for the seventh straight week,” analysts at Wells Fargo Securities wrote in a note.

U.S. private sector firms reported a slightly slower rate of contraction in activity in May, with IHS Markit reported that its flash manufacturing purchasing index rose to 39.8 in May from 36.1 in April. The data suggest that “activity is at best recovering only gradually as the first coronavirus restrictions are lifted,” said Andrew Hunter, senior U.S. economist at Capital Economics.

Strength in the U.S. dollar also put pressure on gold. The “dollar has rebounded off increased trade tensions between the U.S. and China,” analysts at Zaner Metals wrote in a daily note.

“In addition to the trade influenced bounce in the dollar, we also see threats of trade conflict keeping the Chinese economy in a slower climb out from the lock down and that in turn could hold back improvement in Chinese physical gold demand,” they said.

Minutes from the policy-setting Federal Open Market Committee Wednesday helped to fuel worries of deflation which wouldn’t be bullish for gold that tends to draw bids in inflationary environments.

Overall, Fed minutes that were released a half-hour after gold prices officially settled Wednesday indicated that the central bank would use “the full range” of their tools to support the economy through the challenging pandemic.

Still, precious metals traders may be disappointed that the “Fed promises of more support in the [April] meeting have failed to materialize” since that gathering, said analysts at Zaner Metals.

The U.S. is in ‘relative decline’ as ‘Chinese power is rapidly rising,’ warns Ray Dalio

It’s official: Nvidia is not just a gaming company anymore