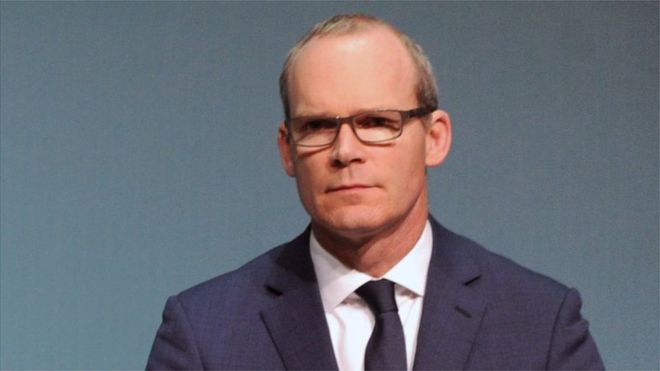 Progress “has not been good” in negotiations to reach a post-Brexit trade deal, the Tánaiste (Irish deputy PM) has said.

The transition period, due to end on 31 December, was intended to allow the UK and EU to negotiate a trade deal.

Downing Street has previously said it will refuse an extension, even if the EU requested it.

“Time is short and there’s an awful lot to do,” said Simon Coveney.

It will be very serious for the Republic of Ireland as it works to rebuild its economy in a post Covid-19 world, added the minister.

Speaking on RTÉ Radio One, the tánaiste said he was concerned that unless significant progress was made soon, the UK and EU would reach “another crisis point” in the negotiations.

“Progress has not been good in the couple of rounds of negotiations we’ve had, of course there have been huge distractions for everybody in the context of Covid-19.

“There are only two rounds of negotiations left before an assessment in mid-summer and one of them is this week.”

He said in that discussion, it had been reinforced how different the negotiating stances between the two sides were.

“The UK seems to want to pick the areas where they want a deal early and solely focus on those, while the EU has made it clear that’s not an approach they can work with,” added the tánaiste.

‘One or two tough moments’

“In order to get a trade deal we need to know there’s a level playing field so businesses in Ireland are not disadvantaged.”

On Tuesday, Cabinet Office Minister Michael Gove told a Lords committee there had been “one or two tough moments” so far in the negotiations to reach a trade deal.

He insisted, however, that there was still no need for an extension to the transition period.

“It is not the case that the UK is being frivolous,” he said, in response to a claim from Mr Barnier that the UK was refusing to engage seriously in the discussions.

“I think it is the case that the EU has a particular view of how the UK should ascent to certain principles and agree to certain ways of thinking, and we take a different view.

“It’s a difference of philosophies.”

The Brexit deal, which saw the UK leave the EU on 31 January, includes special arrangements for Northern Ireland after the transition period ends.

It is due to take effect at the end of this year, and will see NI continue to follow many rules of the single market while the rest of the UK will not.

There will be new controls and checks on goods entering NI from elsewhere in the UK.

It will also mean when relevant EU laws are amended or new ones are drawn up, they will also apply in Northern Ireland.

Last week a joint UK and EU committee focused on how to implement the NI protocol held its first meeting.

New Zealand PM: No open borders for ‘a long time’