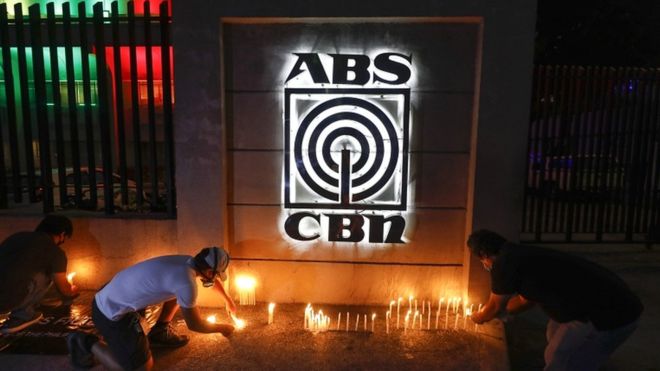 The Philippines’ top broadcaster has gone off air after it was ordered by the media regulator to stop operations.

ABS-CBN said it had been told it could continue broadcasting while it waited for Congress to renew its licence, which expired on Monday.

But the regulator said it must stop on Tuesday.

The channel has in the past angered President Rodrigo Duterte, who correspondents say is well-known for silencing media critics.

Just before its main channel went dark, Chairman Mark Lopez told viewers: “It’s painful for us that we are being shut down, but it’s also painful for millions of our countrymen who believe that our service is important to them.”

In an earlier statement, ABS-CBN said it would stop operations on Tuesday evening to comply with the order from the National Telecommunications Commission, and urged lawmakers in Congress, the lower house of parliament, to renew its franchise.

“We trust that the government will decide on our franchise with the best interest of the Filipino people in mind, recognising ABS-CBN’s role and efforts in providing the latest news and information during these challenging times,” the channel said in a statement.

President Duterte has been engaged in a long-running feud with ABS-CBN, after the channel angered him during the 2016 presidential election by refusing to broadcast his campaign ads.

Opposition lawmakers say the suspension order undermines the fight against the coronavirus outbreak, which has infected more than 9,600 people in the country and killed more than 600.

Antonio Albano, vice-chairman of the lower chamber’s committee on legislative franchises, said Congress would order the telecoms body to explain its action.

“We are up in arms against this,” he told DZMM radio, adding that only Congress could grant or revoke the franchise.

Media watchdogs describe the move as a serious blow to press freedom.

“Ordering ABS-CBN to stop its operations is an outrageous attack on media freedom… The Filipino people need accurate information from independent sources. The government must act immediately to keep ABS-CBN on air and cease all attempts to curtail media freedom,” Amnesty International’s Philippines section director Butch Olano said in a statement.

“This latest move against ABS-CBN occurs after repeated attacks in the past against the network by President Duterte himself. It is yet another attack on freedom of expression in recent weeks, following the authorities’ legal threats against people who criticised the government’s response to the pandemic.”

Founded in 1953, the media conglomerate employs some 11,000 people; it owns radio and television stations nationwide, and distributes online content.