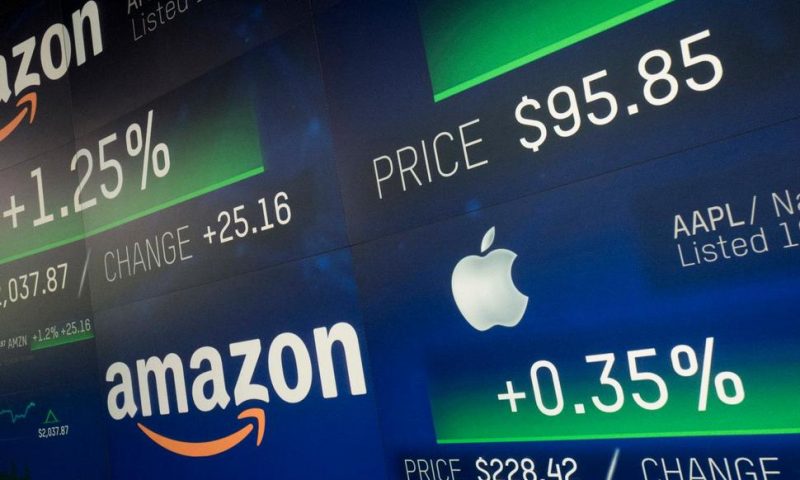 Never before have five companies held such powerful sway over the U.S. stock market.

NEW YORK — Now that they’ve already taken over our lives, big tech companies are taking over the stock market.

The five biggest U.S. stocks — Apple, Microsoft, Google’s parent company, Amazon and Facebook — have grown so explosively that they account for nearly 18% of the S&P 500 index by market value, when they make up just 1% of its population. Never before have five companies held such powerful sway over the index, according to Morgan Stanley strategists.

The swelling at the top increasingly matters for regular investors, who have been putting more of their 401(k) accounts into funds that mimic the S&P 500 and other indexes. The majority of money invested in U.S. stock funds is now in index funds, according to Morningstar, and any $100 going into an S&P 500 index fund is automatically putting nearly $18 of it into just those five stocks.

The trends mean investors are increasingly beholden to the fortunes of five companies. Consider last Thursday, when Microsoft alone accounted for two thirds of S&P 500 index funds’ gains. These tech giants can carry just as much weight on the way down, and that increases risk for investors, particularly when the threat of additional, profit-reducing government regulation is hanging over the industry.

“This doesn’t have to correct itself immediately,” Morgan Stanley strategists wrote in a recent report for investors, but they nevertheless see it as unsustainable.

The last time five stocks controlled this much of the S&P 500 was during the tech bubble at the turn of the millennium. That bubble eventually popped, and stocks like Cisco and General Electric shrank to become smaller players. Microsoft was also among them, but it has since climbed back to the top.

One difference between this time and the dot-com bubble is that many analysts don’t see prices as grossly over-inflated now. Each of today’s Big Five is producing strong growth even when the global economy has been stuck in a sluggish pace for years. Apple’s earnings per share surged 19% in the in the last three months of 2019 from a year earlier, for example.

Morgan Stanley sees the top 1% loosening its hold on the S&P 500 in one of two ways. The first scenario has investors deciding on their own to move their dollars to less-loved areas of the market, which would be a positive for the overall stock market. The second would be more negative: Investors leave once the Big Five show they’re unable to sustain their eye-popping growth.

Until then, the concentration at the top of the S&P 500 puts more pressure on investors to keep their portfolios diversified, said Emily Roland, co-chief investment strategist at John Hancock Investment Management.

One of the tenets of investing is to have a diversified portfolio, where some pieces can zig when others zag in hopes of keeping the overall pot safer. An index fund owning hundreds of stocks may be less diversified than it appears, though, when the five most dominant companies within it can often move in a herd given how much overlap is in their businesses.

“It takes work, but look at areas that really can help provide that diversification that investors really need right now,” Roland said. “It sounds so boring, but balanced is beautiful.”