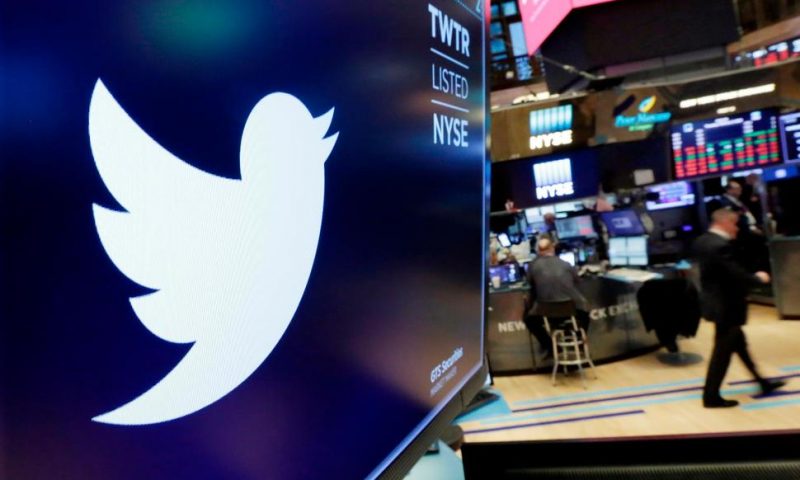 Shares in Twitter have surged after the social media company said its revenue and user numbers exceeded forecasts.

The San Francisco-based tech company said that fourth-quarter net income fell 53% to $119 million, or 15 cents per share. That’s down from $255 million, or 33 cents, in the same period a year earlier.

Twitter had revenue of $1.01 billion during the quarter, a 11% increase and the first time revenue surpassed $1 billion.

Chief Financial Officer Ned Segal called it a “new milestone” for revenue. He said performance was solid in most of the world, with particularly strong advertising revenue in the U.S.

The company averaged 152 million daily users during the last three months of the year, up from 145 million during the previous quarter.

While the net income figure was below analyst forecasts for $231 million, other figures cheered investors, sending shares up nearly 18% to $39.30 in early afternoon trading Thursday.

The sales figure was on the upper end of market expectations, according to data provider FactSet. And the number of active daily users was above the forecast for 147 million.

Last year, Twitter started disclosing its daily user base, or the number of users who log in at least once a day and see ads on the platform. The daily metric has replaced its monthly user count, which Twitter said it will no longer disclose. Other companies, such as Facebook, give both daily and monthly counts.

Twitter executives said the company is making it a priority to clean up its platform.

“We’ll increase healthy public conversation,” CEO Jack Dorsey said on a call with analysts. “Misleading information is probably the biggest challenge facing us and our industry. This will be a key focus for us.”

Tech companies have been stepping up their efforts to remove misinformation, abuse, hate speech and spam.

In Twitter’s latest move, announced this week, the company said it will start labeling or even taking down doctored or manipulated photos, audio and videos designed to mislead people.

All that requires more staff, contributing to a 22% increase in expenses, to $854 million. Twitter expects to grow staff company-wide by at least 20% in 2020, and expenses will grow about 20% as well.

Twitter banned political ads from its platform starting in November. While a big symbolic move, such ads did not contribute much to its revenue in the first place.

Both the ads ban and the new labels “should resonate positively with users and continue the growth in engagement in the next quarter,” said eMarketer analyst Nazmul Islam.

For the full year, Twitter had net income of $1.47 billion on revenue of $3.46 billion. For the current quarter, Twitter forecasts revenue to come in between $825 million and $885 million.

Dorsey said he wanted Twitter’s staff to be less focused on San Francisco, in an indication that he thinks the company should look more to fast-growing international markets.

“Our concentration in San Francisco is not serving us any longer,” Dorsey said. “We’ll strive to be a far more distributed workforce which will help us improve our execution.”

Corporate America Has a 1%, Too, More Influential Than Ever