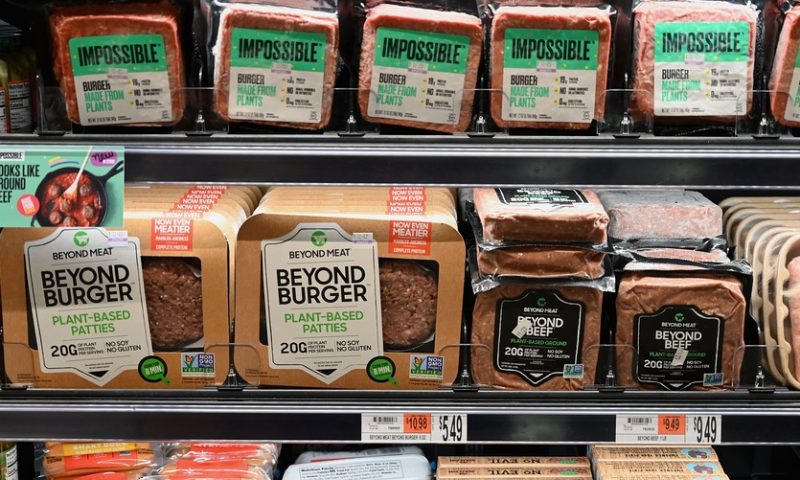 Now that the stock has crashed from its post-IPO highs, it’s time to take a fresh look

The last several months have not been kind to plant-based burger purveyor Beyond Meat. But this could change in 2020 as investors remember why this much-hyped stock did so well in its first days of trading.

After pricing shares at $25 in a May IPO, Beyond Meat BYND, -0.99% offered a first print at $46 a share and quickly raced up to more than $200 a share in July. However, that was clearly too much too soon, and shares crashed soon after.

However, at around $75 a share, investors who bought on that first day of trading have still done much better than the roughly 15% returns for the S&P 500 index SPX, +0.00% over the same period. And now that the early momentum trades have washed out and a few earnings reports are under the company’s belt, the stock has a chance to show what it has to offer.

Here are five big reasons investors should give this plant-based burger company a second look in 2020 now that the volatility is over and shares have stabilized.

Beyond Meat is profitable

You may have noticed headlines that Beyond Meat’s stock price took a plunge after its October earnings report. However, the details make that response a bit of a head-scratcher as the company posted its first GAAP profit in corporate history.

When you juxtapose this with money-bleeding unicorns like Uber Technologies UBER, -1.63% that reported a $5 billion loss in a single quarter earlier in 2019, you have to wonder why Wall Street isn’t willing to give the stock a bit more leash – particularly since that report beat on both the top and the bottom line to boot.

Forecasts are for a full-year profit in 2020, meaning this wasn’t a one-quarter fluke. Investors who rightfully are skeptical of perpetually money-losing startups should look a bit closer at Beyond’s earnings details before writing this stock off.

Equally impressive in the October report was revenue that was triple that of the prior year — and it beat expectations. Looking forward to 2020, growth “slows” but to a rate of more than 70% over 2019.

Those raw rates are enough to make any investor sit up and take notice. Furthermore, a look again at Uber and its ride-sharing peer Lyft LYFT, +0.24%  shows that both have forecast 2020 growth rates of about 30% on the top line. Sounds impressive, but Beyond Meat is doing much better than these two stock-market duds.

One of the reasons that Beyond Meat can put up strong fundamentals is that it is working the consumer market in a host of ways to find new markets and strong partnerships. I personally have dined on its sausage patties at Dunkin’ Brands DNKN, +0.31% and a grilled Beyond burger at Dave & Buster’s PLAY, -1.45%. What’s most amazing to me is that as a parent of two kids under 11 who was browbeaten into patronizing these eateries, I could find these meat alternatives in such mainstream places.

There’s also Beyond nuggets at KFC (owned by Yum! Brands YUM, +0.11%  ), Beyond meatball subs at Subway and burgers at everywhere from TGI Fridays to Carl’s Jr.

If you’re trying to connect with a public that may not be willing to snap up meat alternatives every Sunday at the grocery store, this ambitious strategy is an incredibly shrewd way to elevate the brand.

Skeptics will argue that it’s always easier to grow dramatically from a low base, and none of these fundamentals should matter much since this is a company tracking a mere $500 million in revenue next year on a valuation of just $5 billion. But isn’t that the theoretical appeal of initial public offerings, that you’re getting in on the ground floor?

Chasing anemic metrics in mature companies that offer late-stage IPOs just so insiders can exit is a fool’s errand — and one I’ve warned against. Beyond Meat is one of the rare opportunities out there for a higher-risk but also higher-reward growth play. If you want to pile into an overpriced Airbnb offering next year, be my guest – but I’ll stick with a true growth story in Beyond Meat.

The meatless trend is here to stay

Stick-in-the-mud investors often miss out on big trends because they love to naysay the megatrends of the future. When Amazon.com AMZN, +0.06%  started, many said nobody would ever give out their credit-card information online and that e-commerce was a niche service. Similarly, electric cars were labeled a fad when Tesla TSLA, -0.13%  hit public markets in 2010; now there are more than 1 million EVs on U.S. roads and the number is increasing fast. Today folks want to act like plant-based burgers are akin to ombre hairstyles and will be replaced by the latest fad in a few months.

Here are the facts: Vegetarians make up 5% of the American population, according to a 2018 Gallup poll, good for more than 16 million people. Furthermore, that number rises to 8% when you look only at the 18-to-34-year-old demographic. What matters most for investors these folks tend to be more affluent — and therefore, but better customers to go after for consistent profits.

From health reasons to ethical reasons to concern for the environmental impact of megafarms that raise livestock for food, the movement to meat alternatives is real and persistent. Beyond Meat is sure to face competition from Impossible Foods and others as well growing pains, but the tailwind of this dining trend is a great long-term factor.

The Secure Act changes the way people will inherit money — are you hit by the new rules?