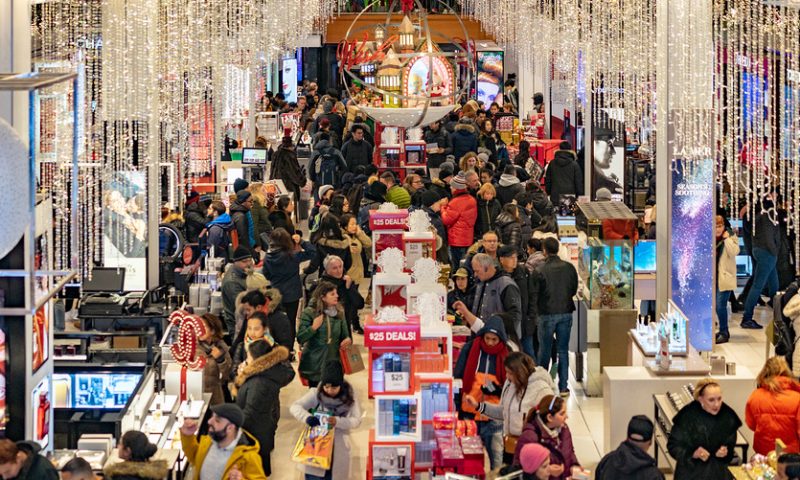 U.S. stocks powered higher again Thursday, helped by reports of record year-end retail sales, though trading volumes were light and markets were closed in Europe, Hong Kong and Australia for another post-Christmas holiday.

Amazon led the market up, with the stock gaining more than 4% after the e-commerce giant said the holiday shopping season broke all records.

Market participants are focused on the prospects of completing a phase-one U.S.-China trade deal, with investors encouraged by comments from President Donald Trump and Chinese officials.

On Wednesday, Chinese Foreign Ministry spokesman Geng Shuang said officials from Beijing and Washington were in “close communication about detailed arrangements for the deal’s signing and other follow-up work.” Those comments follow remarks from President Trump, who on Christmas Eve said that the “deal is done, it’s just being translated right now.” Trump also said that he and China’s leader, Xi Jinping, would hold a signing ceremony for the partial trade resolution in January. “We’ll be having a quicker signing because we want to get it done.”

Meanwhile, some investors also drew optimism from a report from Mastercard indicating that total U.S. retail sales for Nov. 1 through Christmas Eve rose 3.4% from a year earlier. Online shopping registered a record 14.6% of total sales, according to Mastercard Spending Pulse.

The number of people filing for U.S. unemployment benefits slid for a second straight week, the Labor Department said, after claims spiked in early December due to the Thanksgiving holiday.

“The labor market is strong and the economy is still growing meaning corporations are generating revenues and we are confident American C-suite ingenuity will convert sales to earnings next year to keep the stock market in the plus column,” MUFG chief economist Chris Rupkey wrote. “You can buy it now or buy it later.”

Monetary stimulus from central banks has offset the effects of President Trump’s trade war and driven asset prices higher this year. The combined monthly balance-sheet expansion of the Federal Reserve, European Central Bank and Bank of Japan will end this year at the highest level since 2017 as each hoovers bonds to boost economic growth or ensure money market liquidity.

Shares of Boeing BA, -0.92% slipped nearly 1% Thursday. All eyes are on the Dow component, which on Monday replaced its CEO in an effort to right itself after months of missteps.

Oil prices moved to settle at their highest since September 16 in the wake of a fall in U.S. inventories in weekly data reported late Tuesday before the Christmas holiday. West Texas Intermediate Crude CL00, +0.32% rose 0.9% to $61.68 a barrel on the New York Mercantile Exchange.

The U.S. dollar DXY, -0.39% edged lower relative to a basket of its rivals, with the ICE Dollar index, a measure of the buck against six rival currencies, down 0.1%.