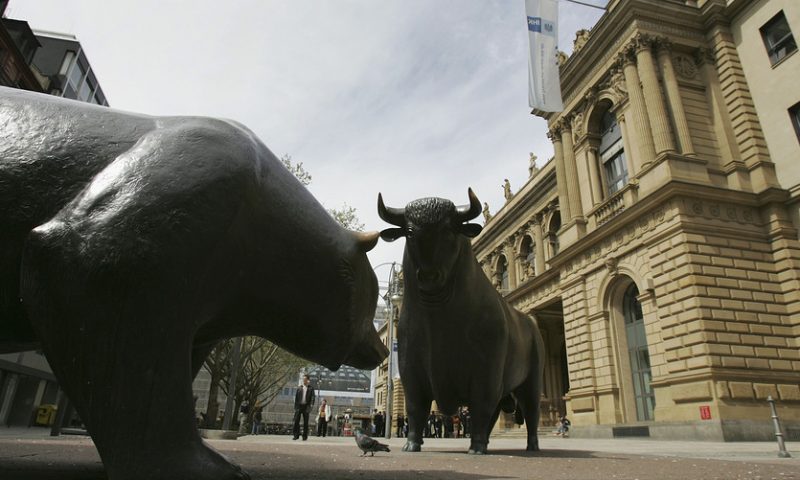 U.S. stocks recovered from a morning slide and moved higher to close in the black on Thursday as investors remained optimistic about prospects for a U.S.-China trade deal despite a looming deadline for the imposition of fresh import tariffs by President Donald Trump.

How are major benchmarks performing?

As of Thursday’s close, all three indexes will still closely the week lower: the Dow is still on track to decline 1.3%, the S&P 500 is poised for a 0.7% skid, and the Nasdaq Composite will see a decline of 1.1%.

Investors are still optimistic about a U.S. – China trade deal after a spokesman for China’s Ministry of Commerce, Gao Feng, said at a weekly briefing on Thursday that negotiations toward a so-called phase-one pact to cease tariff hostilities between the world’s largest economies are progressing. However, Feng emphasized that China wants a rollback of existing tariffs to be included as a part of any resolution.

The comments come after President Trump on Wednesday described negotiations in upbeat terms ahead of a Dec. 15 deadline at which import duties will be placed on $156 billion in China goods. President Trump earlier in the week had raised fears that a resolution may not be achieved until after the U.S. 2020 presidential elections.

“Progress on U.S.-China trade discussions needs to come sooner rather than later if economic growth or corporate profits are going to improve in 2020,” John Lynch, Chief Investment Strategist for LPL Financial, said in a note.

But as the Wall Street Journal reported Thursday, the value of the farm goods China will buy from the U.S. is still an issue. President Trump is said to want a $40 to $50 billion a year pace of purchasing, twice as much as China bought before the trade war began in 2018.

In U.S. economic data, the nation’s trade deficit dropped almost 8% in October to a 16-month low, largely because of lower imports from China, but the U.S. is on track to record the biggest annual trade deficit in 11 years despite President Trump’s trade war with China.

The number of Americans who applied for unemployment benefits at the end of November fell to the lowest level in seven months and returned close to a 50-year low, but the sharp decline in jobless claims likely stems in part from the Thanksgiving holiday.

The market now awaits the monthly U.S. Labor Department report on payrolls and unemployment due Friday. The MarketWatch consensus forecast is for a gain of 180,000 jobs in November.

“Should the jobs report come in reasonably healthy and the trade negotiations keep moving forward, December will also likely be a better month than the headlines at the start of the month suggested,” Brad McMillan, chief investment officer at Commonwealth Financial Network, said. “December is historically a strong month for markets, and a Santa Claus rally remains possible, despite the volatility at the start of the month.

Chesapeake Energy Corp. CHK, -3.18% shares pulled back after a hefty increase Wednesday after the company secured a debt financing deal. It was the most actively-traded stock on major exchanges Thursday.

Tax adviser H&R Block HRB, -0.13% reported that its net loss widened from a year earlier in its recent quarter, and reaffirmed its revenue guidance for the year. Shares were fractionally lower.

How are other markets faring?

Oil futures rose on reports that OPEC and its allies have recommended cutting production by 500,000 barrels a day, on top of the current output-cut agreement, ahead of the official gatherings of major oil producers in Vienna over the next two days. West Texas Intermediate crude for January delivery CLF22, +1.20% rose 62 cents or 1.2% to $52.04 a barrel on the New York Mercantile Exchange.

Asian markets inch up ahead of U.S. jobs report