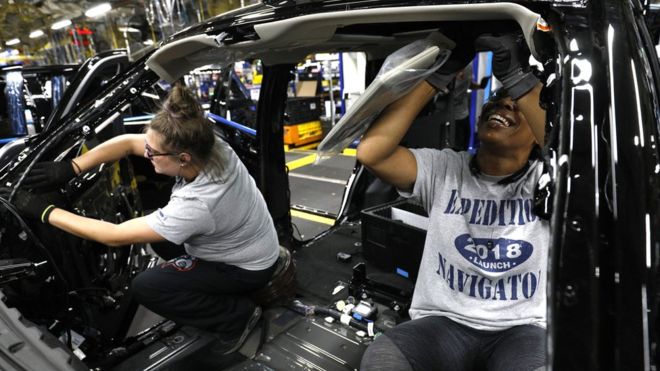 The US unemployment rate has fallen to a 50-year low, possibly easing recession worries after recent weak economic data.

The Labor Department figures showed that the rate fell to 3.5% in September from 3.7%, with the economy adding 136,000 jobs last month.

In addition, August data was revised up to 168,000 jobs created instead of the previously reported 130,000.

However, wage growth was unchanged and manufacturing jobs fell in September.

The report came on the heels of a string of weak economic reports, including a plunge in manufacturing activity to more than a 10-year low in September and a sharp slowdown in services industry growth to levels last seen in 2016.

There are fears that the Trump administration’s 15-month trade war with China is spilling over to the rest of the US economy, which has been one of the few bright spots in a world where many other countries are experiencing marked slowdown.

Despite the continued moderate employment growth and sharp drop in the jobless rate, many economists still expect the Federal Reserve to cut interest rates at least one more time this year.

The US central bank cut rates in July for the first time since 2008 and cut them again last month. It is trying to keep the longest economic expansion in US history, now in its 11th year, on track.

September’s job gains were below the monthly average of 161,000 this year, but still above the roughly 100,000 needed each month to keep up with growth in the working-age population, according to economists.

Manufacturing shed 2,000 jobs last month, the first decline since March, after hiring 2,000 workers in August. The sector is seen as having borne the brunt of the trade wars.

This week, Washington announced tariffs on aircraft, other industrial products and agricultural products from the European Union as part of a dispute over aircraft subsidies given to Boeing’s rival Airbus.

What’s been worrying the markets?

Shares were hit earlier this week by some disappointing economic surveys.

While the manufacturing sector has been the weak point of the US economy, the services sector had been performing more strongly.

However, he said that on Wednesday, the non-manufacturing purchasing managers’ index – which tests the mood of businesses – showed its slowest rate of growth for three years.

“The key question has been, OK, manufacturing’s weak but so long as the service sector holds up and continues to be resilient, the US economy can avoid recession,” Mr Shearing said.

Jim Reid, a strategist at Deutsche Bank in London, said that the US has been the “bright spot in a pretty moribund” western world, growing at about 2% to 2.5% a year, while Europe slips towards 0.5% or even 0% growth.

It is just a US problem?

Mr Shearing said that the manufacturing sector is weak globally.

“The essence of the issue is that since May this year, the manufacturing data both in the US and globally has been pretty horrific,” he said.

But economies are less reliant on manufacturing than in the past. In the US, for instance, it makes up about 12% of the economy.

“We tend to think of the economy being about making things, but actually in the modern era it’s more about services – health, retail, leisure,” he said.

Why does the American economy matter?

The US is still the world’s biggest economy – despite the growth of China – and if it slows down the rest of the world can be expected to do so too. It is almost impossible to have a US recession without the rest of world suffering too.

Mr Shearing said it is not just about its size. “It’s the consumer of last resort,” he said, describing the US trade deficit which President Donald Trump has complained about.

“What the trade deficit is telling you is that the US consumes more than it produces,” he said. “If it slows, there’s repercussions”.

What does it mean for US interest rates?

Federal Reserve chairman Jay Powell has been under pressure from President Trump to cut rates.

Last month, the Fed cut rates for the second time this year, lowering its key target rate by 25 basis points to between 1.75% and 2%. The markets are expecting another cut before the end of the year.