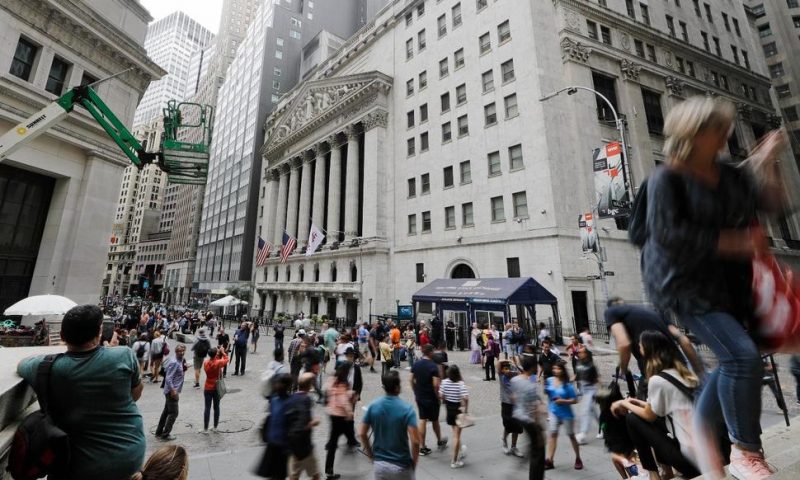 The Dow Jones Industrial Average swung from a loss of more than 330 points to a gain of more than 120 after another disappointing economic report raised expectations among investors that the Federal Reserve will cut interest rates again to help keep the U.S. economy growing. The S&P 500 and Nasdaq also recovered from the early rout.

Traders were jolted by surprisingly slow growth in the U.S. services sector last month, the weakest in three years. That followed troubling news on business hiring and manufacturing earlier this week that knocked the market lower.

“The market is saying rate cuts are good, this data increases the likelihood of rate cuts, so maybe we overreacted a little bit in terms of selling off,” said Willie Delwiche, investment strategist at Baird.

While stock prices recovered from their early stumble, investors continued to shift money into the relative safety of U.S. bonds. That drove bond prices higher, lowering their yields. The yield on the 10-year Treasury fell to 1.54% from 1.59% late Wednesday.

Stocks are off to a turbulent start in October. The benchmark S&P 500 is down 2.2% for the month so far, wiping out all the index’s gain from September.

Investors are wrestling with uncertainty about the economy, mostly due to the costly and long-running trade war between Washington and Beijing. The market slumped early Thursday after investors weighed the latest signal of U.S. economic weakness.

“The weakness this morning was really a continuation of a theme of the last couple of days: economic data disappointing and raising the specter that what had been manufacturing weakness in the U.S. was maybe becoming broader weakness,” Delwiche said.

The Institute for Supply Management, an association of purchasing managers, said that its non-manufacturing index sank to 52.6 from 56.4 in August. Readings above 50 signal growth, but September’s figures are the lowest since August 2016.

The index tracks a sector that accounts for more than two-thirds of the U.S. economy and which has been mostly resilient in the face of the U.S.-China trade war that has been squeezing American manufacturers.

On Tuesday, a private index of U.S. manufacturing output dropped to its lowest level since the recession year 2009.

The discouraging economic data this week has shifted investors’ expectations of further interest rate cuts by the Federal Reserve.

The central bank has lowered rates by a quarter-percentage point twice this year in a bid to shield the economy from slowing growth abroad and the effects of the trade war. The odds that the Fed will cut rates again at the end of this month are now running above 88%, according to the CME Group.

Given the recent spate of downbeat economic data, all eyes will be on the federal government’s September job market snapshot, which is due out Friday. The Labor Department is expected to report that U.S. employers added 145,000 jobs last month, up from 130,00 in August, according to analysts polled by FactSet.

Traders bid up shares in PepsiCo 3.2% after the company told investors it expects to meet or beat its target for revenue growth in 2019. The solid forecast followed surprisingly good third quarter profit and revenue.

GoPro plunged 19.2% after the camera maker cut its profit and revenue forecasts for the year because of production delays.