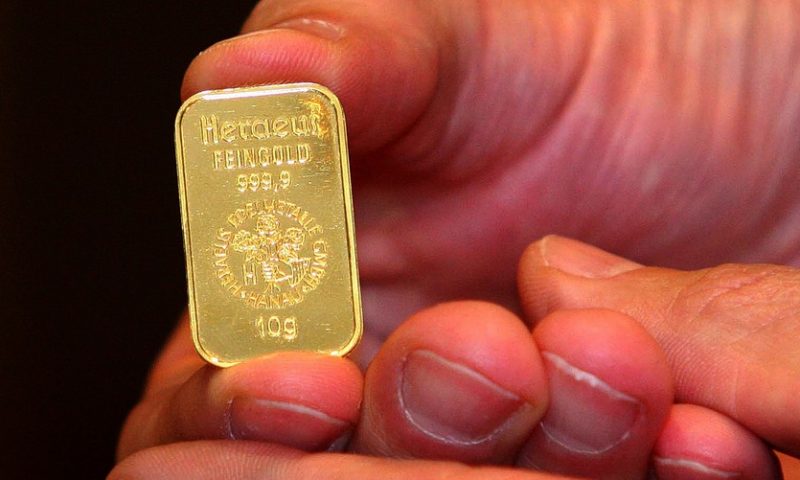 Gold prices suffered their worst single-session decline in a year on Monday to settle below $1,400 an ounce, after a weekend Sino-American trade accord sparked a rally in assets perceived as risky, luring investors away from so-called havens like bullion.

President Donald Trump and China President Xi Jinping met on the sidelines of the Group of 20 gathering of major developed nations in Osaka, Japan, and achieved a detente on trade tensions between the world’s largest economies. Those tensions had underpinned uncertainty among Wall Street investors and driven a flight to gold that gave the metal to its best June in three years, as well as stoked interest in the safety of government debt.

Following the news, the “gold market is under a liquidation rout,” said analysts at Zaner Metals, in a note Monday. “Adding into the liquidation pressure is the fact that the dollar has forged a six-day high and saw a lot of its mid-June selling off fears that the trade issue would pull down the U.S. economy.”

On Friday, bullion saw a roughly 1% gain for the week, and advanced 7.7% for June, The monthly rise was the largest for a most-active contract since June 2016. For the quarter, prices rose more than 8%.

Trump and Xi said the U.S. would maintain current tariffs but hold off on new ones and relax some restrictions for U.S. companies doing business with China technology giant Huawei.

“Gold opened the second half of the year by falling below $1,400 on growing expectations of a breakthrough in the talks on the trade war between U.S. and China,” wrote Carlo Alberto De Casa, chief analyst at brokerage ActivTrades, in daily research note.

“From a technical point of view, gold has fallen below $1,400, testing the area of $1,380, which is now the first key support level to monitor,” he wrote.

The ease of tariff tensions provides some doubts that the Federal Reserve will dial back benchmark interest rates aggressively when they meet at the end of this month to stave off negative effects from trade wars, which is a boon for risky assets but weigh havens.

Economic data Monday was mostly downbeat, the IHS Markit final U.S. manufacturing PMI reading was at 50.6 in June versus an initial 50.1.

Separately, the Caixin China manufacturing purchasing managers index fell to 49.4 in June, moving into contraction territory, from 50.2 in May, Caixin Media Co. and research firm Markit said on Monday. In the U.K., data firm IHS Markit on Monday said its Purchasing Managers Index for the manufacturing sector fell to 48.0 in June from 49.4 in May, hitting its lowest level since February 2013. A reading below 50 signals weakening economic conditions.

Meanwhile, “another element feeding into the liquidation action and could accentuate the selling directly ahead is the fact that the most recent positioning report showed an extensively overbought market,” said analysts at Zaner Metals. “The most recent positioning report in gold showed a net long of 302,000 contracts which effectively puts the spec[ulative] long at the highest level since the third quarter of 2016!”

“The market is vulnerable to more classic stop loss selling, particularly if it appears that the August contract is poised to close below the psychological retracement level at $1,383,” they said.

Among other metals, the most-active September silver contract SIU19, -0.05% which trades both as an industrial metal and a precious asset, lost 14.8 cents, or 1%, to settle at $15.193 an ounce after notching a monthly rise of about 4.8%. Industrial assets tend to gain on signs of easing tensions between Beijing and Washington because the country is one of the biggest importers of industrial assets.