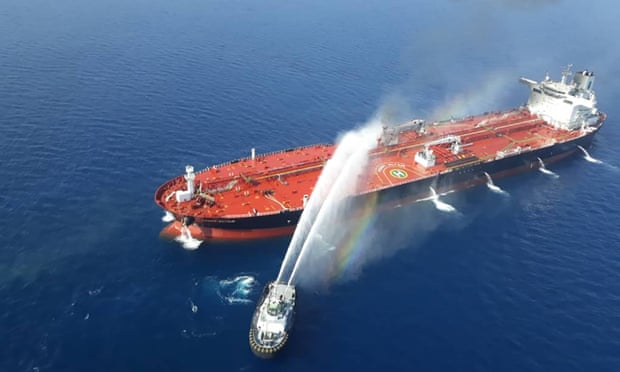 The attack on two oil tankers in the Gulf of Oman has escalated tensions between the US and Iran and raised fears of a surge in global energy prices.

Concerns over a spike in prices centre on Tehran’s potential to close the strait of Hormuz, the narrow shipping lane between Iran and Oman and the world’s most strategically important oil route.

Some ship owners have already taken matters into their own hands after Thursday’s oil tanker attack, the second in as many months, by barring their oil-laden vessels from moving through the strait.

The owners are seeking safety assurances, and are understood to be in talks to secure a naval escort for their cargoes through the waterway, through which almost a third of the world’s oil shipping passes.

One senior London-based ship broker said a number of tankers in the area are unwilling to move without these assurances.

“They are very concerned. Think of the volume of traffic which goes through the strait every day. A naval escort for each laden tanker would take time. Most charters are taking a step back to assess what measures could be taken,” he said.

Donald Trump played down fears Iran might close off the strait. The US president told Fox News on Friday that if it did happen “it’s not going to be closed for long”.

Paolo d’Amico, the chair of the tanker trade group Intertank, said the industry is extremely worried. “We need to remember that some 30% of the world’s crude oil passes through the strait. If the waters are becoming unsafe, the supply to the entire western world could be at risk,” he said.

It is also a major avenue for Qatar’s liquefied natural gas (LNG) exports, or roughly 30% of the global LNG trade. UK gas supplies would not be affected by a short-term closure of the strait.