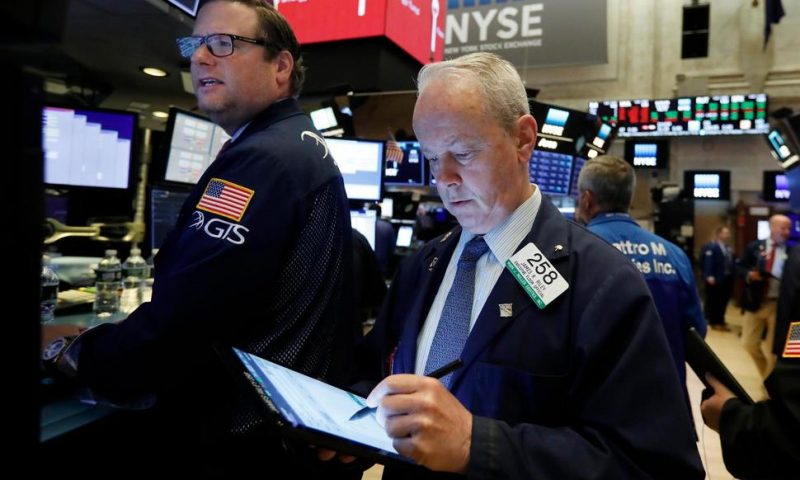 Banks and technology companies accounted for much of the slide as investors shifted money into U.S. bonds, precious metals and other holdings considered safe havens after more than a week of aggressive buying.

Energy stocks took the heaviest losses following a 4% drop in the price of U.S. crude oil. That helped outweigh gains in health care, utilities and elsewhere in the market.

The latest decline followed a broad drop in stocks that ended a five-day winning streak for the market. The Federal Reserve set off last week’s rally when it signaled that it is willing to cut interest rates to help stabilize the economy if the U.S. trade war with China starts to crimp growth.

Investors are worried that the dispute will drag on much longer than previously expected, weighing on economic growth and corporate profits. That has traders looking ahead to next week’s Fed meeting.

“There are concerns about whether or not the Fed next week at its meeting is going to in fact continue to move its stance toward lowering rates,” said Quincy Krosby, chief market strategist at Prudential Financial. “The increasing concern is that the global economy continues to slow and that the slowdown is affecting the United States as well.”

The sell-off in U.S. markets reflects heightened investor uncertainty over trade and its impact on the economy.

President Donald Trump’s decision to threaten an expansion of the trade war to Mexico made a jittery market even more uneasy. Those potential tariffs have been indefinitely postponed, but the move left its mark.

“This was a game changer, the idea that the administration would use tariffs to further policy that is not related to trade is concerning,” said Kristina Hooper, chief global market strategist at Invesco.

Investors will likely have to deal with more volatility ahead of an economic summit later this month. Trump has said he plans to meet with Chinese President Xi Jinping at the Group of 20 summit in Osaka, Japan. But Trump has also said that if the two can’t reach an agreement on trade, he’ll proceed with tariffs on $300 billion goods from China that aren’t already subject to import taxes.

Technology companies accounted for much of the market’s slide Wednesday. The sector has been under the most pressure from swings in sentiment over the trade dispute between the U.S. and China. Cisco Systems fell 2.2% and Micron Technology dropped 5.4%.

Traders hammered shares in Dave & Buster’s Entertainment after the company gave investors a dismal first quarter financial report and slashed its revenue forecast for the year. The stock plunged 22.4%, its worst one-day loss in over a year.

Medidata Solutions slid 3.6% after the company announced a deal to be acquired at a discount price to French software company Dassault Systems. The deal values the provider of cloud-based services and software at $92.25 per share, less than its closing price of $94.75 on Tuesday.

In other trading, energy futures finished lower Wednesday. Benchmark U.S. crude slid 4% to settle at $51.14 a barrel. Brent crude oil, the international standard, dropped 3.7% to close at $59.97 a barrel.

Retirees Defy Puerto Rico Govt, Get Pension Deal With Board