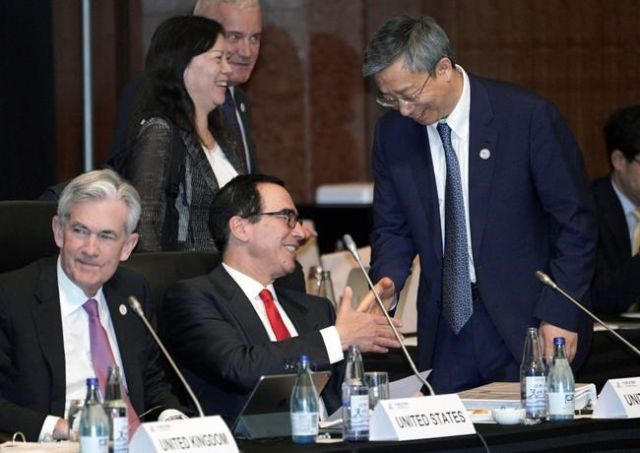 One down, still others to go, as US urges China to resume trade talks where negotiations left off.

FUKUOKA, Japan — One down, still others to go. President Donald Trump claimed a victory after Washington and Mexico agreed on measures to stem the flow of Central American migrants into the United States.

Trump called off plans to impose a 5% tax on Mexican exports, and Treasury Secretary Steven Mnuchin, speaking to reporters Saturday in Fukuoka on the sidelines of a meeting of financial leaders of the Group of 20 major economies, urged China to follow suit and return to stalled negotiations.

Mnuchin said he planned to have a private conversation with the head of China’s central bank, Yi Gang. In a G-20 group meeting later in the day, the two were seen exchanging friendly remarks, but there were no fresh signs Beijing is ready to compromise in the dispute over trade and technology.

“From our perspective of where we are now, it is a result of them backtracking on significant commitments,” Mnuchin said. “I don’t think it’s a breakdown in trust or good or bad faith. … If they want to come back and complete the deal on the terms we were negotiating, that would be great.”

Mnuchin said he had no direct message to give to Yi, who has participated in the 11 rounds of talks so far on resolving the dispute between the world’s two largest economies over technology and trade.

He said there were no plans for trade talks in Washington or Beijing before Presidents Donald Trump and Xi Jinping are due to meet in Osaka for the G-20 summit on June 28-29.

“This will be a one-on-one with Gov. Yi to talk alone about the trade issues,” Mnuchin said. But he added, “I would expect the main progress will be at the G-20 meetings of the presidents.”

The Trump administration began slapping tariffs on imports of Chinese goods nearly a year ago, accusing Beijing of using predatory means to lend Chinese companies an edge in advanced technologies such as artificial intelligence, robotics and electric vehicles. Those tactics, the U.S. contends, include hacking into U.S. companies’ computers to steal trade secrets, forcing foreign companies to hand over sensitive technology in exchange for access to the Chinese market and unfairly subsidizing Chinese tech firms.

The deal with Mexico helps alleviate uncertainty over the deal Washington recently reached on revising the North American Free Trade Agreement. The new U.S.-Mexico-Canada deal has been heading toward a vote in Congress and might have been stymied by new tariffs. But the U.S. is still negotiating new trade deals with Japan after withdrawing from a Pacific Rim arrangement, the Obama-era proposed Trans-Pacific Partnership.

The United States now is imposing 25% taxes on $250 billion in Chinese goods. Beijing has counterpunched by targeting $110 billion worth of American products, focusing on farm goods such as soybeans in a deliberate effort to inflict pain on Trump supporters in the U.S. heartland.

The U.S. side has been preparing to expand retaliatory tariff hikes of 25% on another $300 billion of Chinese products, and Mnuchin indicated it was prepared to take that step if negotiations with Beijing fail. But he said Trump had not yet made a decision on that, suggesting room for further delays depending on the outcome of his discussion with Xi later this month.

“As the president has said, if we can get the right agreement, that’s great. If we can’t, we will proceed with tariffs,” he said.

Mnuchin to Hold 1-On-1 Chat With PBOC Gov. Yi