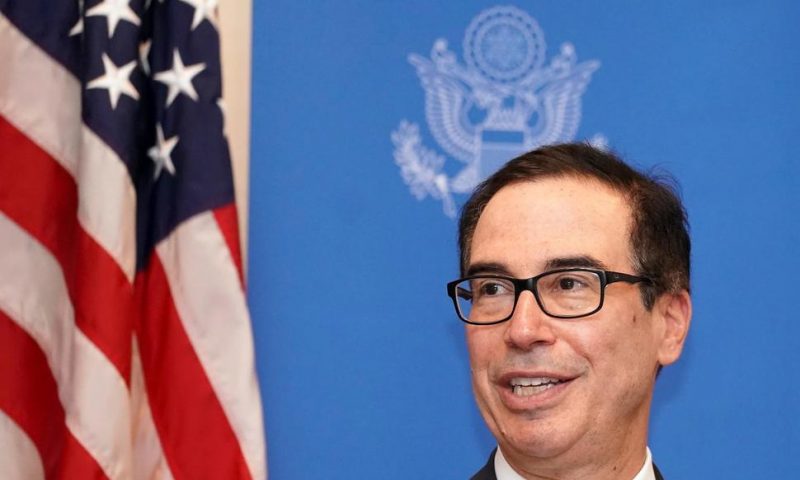 FUKUOKA, JAPAN — The Latest on the meeting of financial leaders of the Group of 20 major economies (all times local):

Mnuchin said Saturday that he would hold routine talks on various issues and then meet privately with Yi Gang, chairman of the People’s Bank of China.

He said the focus of that one-on-one discussion will be the trade dispute between Beijing and Washington. But he said he expects any major progress to wait until a meeting of presidents Donald Trump and Xi Jinping in Osaka later this month.

Mnuchin and Yi are among finance officials attending an annual meeting of the Group of 20 major economies ahead of a summit in Osaka later this month. He said there were no plans for trade talks in Washington or Beijing before then.

Finance chiefs of the Group of 20 major economies meeting in the Japanese city of Fukuoka are debating how to revise tax systems to ensure big companies pay their fair share and support economies as global growth slows.

U.S. Treasury Secretary Steven Mnuchin said Saturday that tax policies must capture the “digitalization” of business to prevent a “race to the bottom” by countries trying to lure companies by offering unsustainably and unfairly low tax rates as an incentive.

Japanese Finance Minister Taro Aso says there must be “no big losers” due to the reforms, which he says could be the most significant in a century.

In Washington, meanwhile, President Donald Trump tweeted that he will refrain from a 5% tariff on exports from Mexico, citing progress on the migration issue.