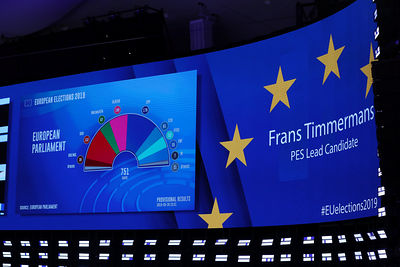 European stock markets traded mostly higher on Monday, driven in part by relief that euro skeptic parties did not advance as expected in EU Parliamentary elections, while autos were also gaining after Fiat Chrysler and Renault finally confirmed merger talks.

London and U.S. markets will close on Monday for public holidays, something that is likely to keep volumes pinned down in Europe.

Elections for the European Parliament were held in the European Union’s 28 countries from Thursday through Sunda. Exit polls showed pro-EU parties won the majority, albeit with shrinking support, though euroskeptic parties did not walk away with as many victories as expected.

In short, center-right and left groups that have controlled European politics for years, saw their majority slip away, and will now need to form coalitions with business-friendly centrists. Greek Prime Minister Alexis Tsipras called for an early national elections after his party suffered heavy defeats in EU elections, news that sent Greece stocks GD, +1.15%  soaring nearly 5%.

A lack of trading in the U.S. and the U.K. was likely to keep action to a minimum.

What stocks are moving?

Auto stocks were among the big gainers, with Renault RNO, +1.91%  soaring 14% after Fiat Chrysler FCAU, +8.17% FCA, +0.40%  unveiled a merger proposal with the French group that would create the world’s third-largest car maker by production. Fiat shares rose 10%.