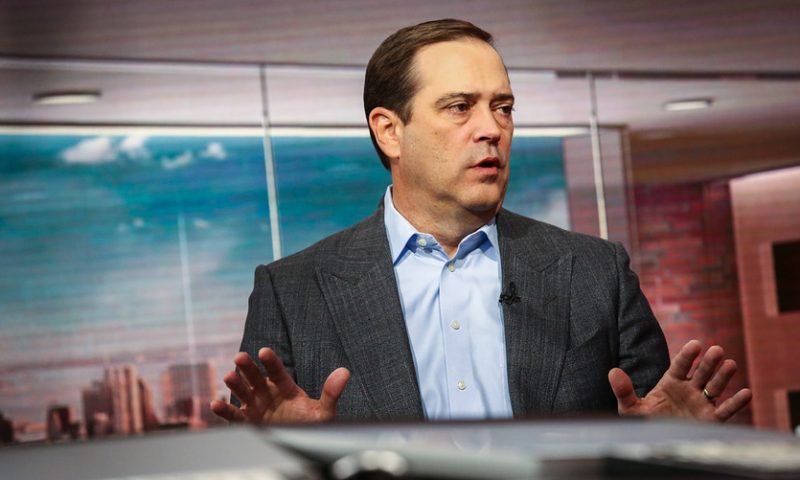 “The last quarter before I took over was a record for revenue, but I said we were going to change everything,” Robbins told MarketWatch in a one-hour, one-on-one interview at the company’s San Jose, Calif., headquarters this month. “The fear was if you change seven things at once and something breaks, the question is, What did we break?”

The unassuming Robbins essentially reshaped a multibillion-dollar legacy company, top to bottom, from one built almost entirely on selling hardware for networking to one focused on hybrid cloud and recurring software subscriptions. The tricky transformation is the stuff that Harvard Business School case studies are made of — in this case, an August 2016 paper that deemed the corporate handoff “a smooth transition.”

Cisco’s CSCO, +0.33% metamorphosis was not entirely smooth, though: It required a change in operations, products and personnel that took more than a year and led to layoffs, wholesale executive changes and some rough quarters. During the transition, Robbins had to dip into a well of salesmanship to convince longtime customers to change along with Cisco.

Omid Mohoeb, global director of network and telecom at Anheuser-Busch InBev BUD, +0.56% , the largest brewer in the world, used to consider Cisco “a hardware company selling boxes.” But as Cisco has morphed, so has Anheuser-Busch’s use of its technology.

“Now, we view them as more of a service provider that connects hardware and services,” says Mohoeb, who plans to shift to a Cisco subscription model in a few years.

That was the aim Robbins had when he took the mantle nearly four years ago, and some analysts are now comparing Cisco’s renaissance with Satya Nadella’s reboot of Microsoft Corp. MSFT, +0.05% as a major cloud vendor as much as a software powerhouse. Robbins, 53, has been able to pull it off despite industry skepticism over the pivot of a 34-year-old company so closely identified with networking hardware.

“Kudos to Chuck Robbins for doing a commendable job shepherding Cisco through geopolitical issues, such as competing with Huawei, and reaching for a greater share of the public cloud wallet from Google GOOGL, -0.59% GOOG, -0.64% , Amazon AMZN, +0.43% and Microsoft,” IDC analyst Rohit Mehra told MarketWatch in a phone interview. “Many thought the cloud was Cisco’s kryptonite and would eventually lead to its demise. How Cisco transformed itself from a hardware box seller into a trusted technology partner helping customers navigate the complex cloud world is one great story.”

What the company is accomplishing isn’t unprecedented — venerable tech giants like Adobe Inc. ADBE, +0.19% along with Microsoft have moved to the cloud as part of their turnaround narratives. But neither software-focused company faced the same challenges as Cisco, a hardware company overly dependent on network switches and other devices that often weren’t replaced for years.

“No question Adobe and Microsoft are tremendous companies that have done great transitions to the cloud, but they have a number of pure software assets,” Robbins said. “We are predominantly a hardware company. This is more complicated.”

Cisco’s second act under Robbins, which started in mid-2015, has picked up steam in the past 18 months, with revenue growth, and the promise of more to come, pushing shares up almost 25% in the past year. But it hasn’t been easy: It took seven quarters of declining growth before the plan took hold.

While some aspects of Cisco remain intact from Chambers’s reign, it’s significantly different in terms of its business model, culture and leadership, insiders and analysts say.

“There was considerable turnover in executive ranks and the overall talent pool,” JMP Securities analyst Erik Suppiger told MarketWatch in a phone interview. “Lately, Cisco has been able to achieve modest growth, but they need to identify and capitalize on growth opportunities” beyond networking hardware, he added.

Cisco, which established its name on networking equipment, continues to invest heavily in cloud, security, the “internet of things” and data centers. In the past four years, the acquisition-happy company has snapped up 31 companies across analytics/data center (10), networking (seven), security (six), cloud (four) and collaboration (four).

As Cisco has changed, so, too, has its revenue stream. Though a majority of Cisco’s revenue still comes from the sale of hardware, $9.7 billion in its April quarter, its software sales are steadily increasing. Importantly, a growing percentage of those sales came from subscriptions, with 65% of software sales in its April quarter coming through subscriptions, compared with 57% in the year-earlier quarter. Chief Financial Officer Kelly Kramer has said that the software transition will lead to 30% of Cisco’s revenue coming from software sales by 2020, up from 22% in 2017, and she said in an earnings conference call this month that Cisco is ahead of schedule on that goal.

A key driver is demand for its subscription-based Catalyst 9000 family of network switches, the fastest-growing product in Cisco’s history. The software-rich Catalyst 9000 was introduced in 2017 to offer organizations integrated advanced security, automation and better performance as they need it via a paid subscription plan.

Corporations in the midst of digital transformations are ordering technology as if off a menu, based on needs and level of expertise, IDC analyst Mehra said. Cisco is “in Year 3 or 4 in a 10-year transformation,” he said, and its progress is “slow and steady.”

Cisco customers are on a similar arc. Increasingly, Penn Mutual Life Insurance Co. is buying hardware updates via a subscription plan from Meraki, the cloud-infrastructure company that Cisco acquired for $1.2 billion in 2012.

“There is a simplicity to adding features as we need them,” said Paul Steinberger, a network engineer at Horsham, Pa.–based Penn Mutual, which also uses Cisco network switches to connect several hundred employees to company computer servers and the internet. “It makes administration easier.”

Under Chambers, Cisco’s annual sales rocketed from $1.2 billion in 1995 to nearly $50 billion in 2015, cementing his status on Silicon Valley’s Mount Rushmore. In 2000, Cisco was briefly the most valuable company in the world, with a market capitalization of $557 billion, more than twice today’s valuation of roughly $250 billion. However, Cisco’s double-digit growth stalled toward the end of his tenure amid wrenching industry changes that helped smaller, nimbler rivals find ways to design and manage computer networks.

Chambers, who now runs a venture-capital firm in Silicon Valley, declined to comment on Cisco in an email. Robbins and Chambers — who stepped down as executive chairman in late 2017 — maintain a close relationship and occasionally golf together, Robbins said.

The transition from Chambers, an alpha male who could command a room even while hanging out with world leaders, to Robbins, a former JV basketball player at the University of North Carolina who favors a team-oriented approach, wasn’t entirely vexing. Both men were brought up in small Southern towns, share backgrounds in sales with an emphasis on customer service, and agreed that Cisco had to jump to the digital age.

The story is far from over. Cisco is still in the beginning of its transformation, Mehra and others point out, and Robbins has faced several potential hurdles along the way. The latest: murmurs of an economic slowdown, intensified competition with rival Huawei Technologies, and a trade war with China.

Cisco’s efforts in cybersecurity have been a big draw for investors, but slackening enterprise spending in early 2019 recently dinged the results of rivals like Symantec SYMC, -0.60% and Check Point Software Technologies CHKP, +0.47% . This makes analyst Suppiger cautious about Cisco’s long-term prospects.

“Companies are recalibrating their digital transformation projects — particularly cybersecurity in the cloud,” Suppiger said. He has a rating of market perform on Cisco shares but no share-price target. “[Corporate customers] are struggling to strategize and reassess that part of the business.”

Robbins never assumed any of this would be easy, though, and knows he has a long road ahead.

“We must constantly transform,” he said, with a nod to the past and an eye to the future. “We need to constantly make changes in order for Cisco to stay relevant over the next three, five, 10 years — especially in today’s rapidly changing environment.”

Chambers put it more bluntly in an interview at his tony Silicon Valley home last year: “Traditional companies can’t move with the speed they once did. Anyone who misses will be Amazon’d or Uber’d.”