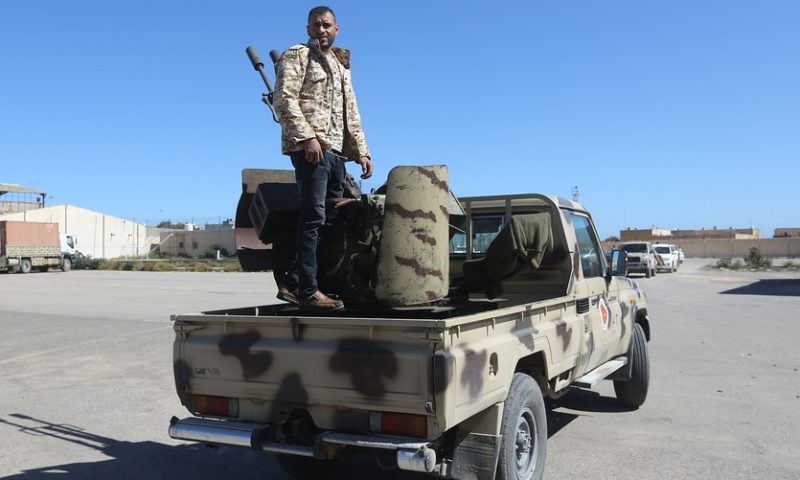 Renewed fighting in Libya raises the risk of a civil war between numerous militia, analysts warn

Brent crude, the international benchmark, hit fresh five-month highs in Monday action, and U.S.-traded oil was tagging along in step, both boosted by signs that trade tensions are easing between the U.S. and China, as well as continued expectations for tighter global supplies.

Developments for fighting in Libya remained a peripheral factor for the energy markets as well.

Among the more direct drivers were reports that China’s state-owned energy giant Sinopec had resumed buying U.S. oil, which was bullish for the oil market, said consulting firm JBC Energy. According to the U.S. Energy Information Authority, U.S. crude exports to China had dried up from mid-2018 through recent weeks, after having averaged over 300,000 barrels a day in the first half of last year.

“This has, over Q1, left a crude export stream more than twice the size of Libya to supply the rest of the world, where crude demand growth is muted,” the JBC Energy analysts said in a note.

Oil was lifted last week when a stronger-than-expected rise in March nonfarm payrolls helped to soothe worries for energy demand. Data from oil-field services firm Baker Hughes showing that the number of U.S. oil rigs rose by 15 this week to 831 did nothing to dent market gains. The rise came after six consecutive weeks of declines. Brent is up 30.7% in the year to date, while WTI has rallied nearly 39%, boosted by production cuts by the Organization of the Petroleum Exporting Countries, led by Saudi Arabia, and its allies led by Russia.

Meanwhile, the U.S. military said it pulled a small contingent of American forces from Libya as the country teetered on the brink of full-scale civil war, with fighting continuing around the capital Tripoli.

The evacuation is the latest turn in a troubled history of American military involvement in Libya, which has been in turmoil since the overthrow of Moammar Gadhafi in an armed uprising supported by North Atlantic Treaty Organization airstrikes in 2011. U.S. forces have also played a key role in uprooting Islamic State, which gained a foothold in Libya in the chaos that ensued after the Arab Spring.

“Renewed fighting in Libya, this time close to the Tripoli. raises the risk of a civil war between numerous militias, some supported by foreign governments,” said Ole Hansen, head of commodity strategy at Saxo Bank. “Libya’s production reached 1.1 million barrels/day last month according to a Bloomberg survey.”

Added Hansen: “While its oilfields are located far from Tripoli it nevertheless raises the temperature a few more notches. Not least given ongoing production cuts from OPEC and Russia together with the sharp reductions due to crisis and sanctions from Venezuela and Iran. All in all it has created a very lonely place for the those looking for lower prices, especially President Trump who is now faced with the highest seasonal cost of U.S. gasoline since 2014.”

The oil market is also keeping tabs on this week’s major bond issue from Saudi Aramco. Saudi Energy Minister Khalid al Falih said Monday that he expects strong demand for the oil giant’s first-ever bond issue expected to close on Wednesday. Demand for the bonds should be “north of” $30 billion, al Falih said while speaking at the inaugural Gulf Intelligence Saudi Arabia Energy Forum in Riyadh on Monday, CNBC and other news outlets reported.

If realized, that is well above the $10 billion projected when the sale was first announced. The deal, from the state-controlled company that ranks as the world’s richest, carries high credit ratings and will generate proceeds for a $69.1 billion purchase of a majority stake in petrochemicals firm Sabic.