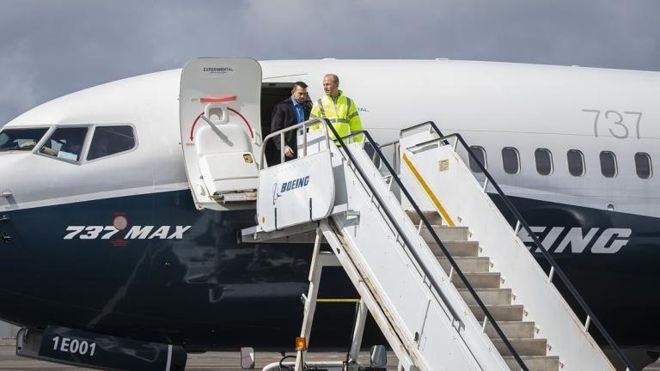 Boeing’s boss has admitted that a failure in its 737 Max jet’s anti-stall system, MCAS, was a factor in last month’s Ethiopian Airlines crash.

That disaster, and a Lion Air 737 Max crash in Indonesia five months ago, left a total of 346 dead.

Boeing is working on changes to the MCAS system to restore trust.

However, apart from talk of cancelled orders from some carriers, airlines have, so far, stuck with the plane and 5,000 orders remain on Boeing’s books.

We spoke to three analysts to see whether they thought the aviation giant can reassure customers, both airlines and passengers, that its plane is safe.

‘The sums involved are likely to be eye watering’

I think you have here the fundamentals of the “rolling unravelling” of a strong Boeing brand.

Boeing’s strength was built up over decades, but it meant many made the mistake of regarding the first incident [Lion Air] as a “one-off”. When it became “two-off” on a fleet of just over 350 aircraft, which were also a new variant and a 4th generation design of an aircraft that had design routes in the 1960s, the alarm bells sounded.

Boeing has several groups it needs to convince.

Global regulatory authorities used to accept the US Federal Aviation Authority (FAA) certification, but it is now unlikely to be waved through with the same trust bearing in mind the FAA was so behind the rest in grounding the aircraft.

Boeing will have to deal with at least four separate regulatory authorities as it seeks to return the aircraft to service safely.

Airline customers are unlikely as yet to cancel current orders – although at the very least the market for Max aircraft is likely to soften for a while. There’s a further cost to consider, as carriers awaiting aircraft and having to put emergency plans in place are going to seek financial compensation.

Then there are the human elements. The pilots and crew understand far more of the deep technical issues and will be understandably vociferous about the absolute integrity of the revised hardware, software and procedures. In the light of the evidence to date, they are likely to be very critical and need significant reassurance and explanation.

While many passengers probably do not recognise their aircraft type, events like this inevitably get people talking. Any further incidents, even if slightly related to these issues, would be utterly disastrous for public opinion and really shake trust in aviation safety.

But in the long-term, given there are more than 14,000 single-aisle aircraft in service globally and half of these are Boeings, it is hard to see a scenario where the Max is not returned safely to service and in the long-run accepted by the travelling public as a safe aircraft.

Compensation is going to be significant factor, and the sums involved are likely to be eye watering.

Boeing has a big reputational challenge, although to put it in context the company is well over 100 years old and is one of only two big suppliers [with Airbus] known for producing safe and dependable aircraft.

It has to restore the trust of airline customers and the public but I think its customers will still be confident that safety can be restored.

It is actually difficult to cancel an order, there are cost penalties and there are only two companies in this market. Airlines build their fleets around one brand of plane, it makes sense in terms of parts supplies and the specialist training for engineers and pilots.

Not only that, both Airbus and Boeing have packed order books, so switching to the other company just delays delivery of the new planes.

For the passengers? We’re emotional beings. I’ve had friends around me asking whether I’ll be flying on a Max.

Mostly people simply don’t know what they’re flying on and don’t really care. When I ask people ‘what did you fly on?’ – most don’t even know if it’s an Airbus or a Boeing. This though will sharpen people’s attention, for the short term at least.

These incidents do fade from the memory. Back in the 1970s there was an aircraft, the McDonnell Douglas DC10 which had a couple of unrelated bad accidents. However, that plane went on to have a safe and reliable career.

The other constituents that need reassurance are pilots, after all, they’re the ones with the responsibility for safety in their hands.

So Boeing has to go out with clear messages of explanation and assurance.

There is an old saying in the aviation industry that illustrates how airlines tend to look at aircraft and engine manufacturers: “You sell (engine) thrust, we buy trust!”

Throughout Boeing’s history there has been a strong commitment to safety. In the spirit of this tradition, Boeing – in co-operation with regulatory authorities and the airline community – should focus on identifying the root cause or causes of the recent 737 Max accidents and then put in place well tested substantial solutions rather than premature “symbolic” band-aids.

Boeing needs to be aware of the disconnect between the speed of modern day social media-driven news cycles on the one hand and the significant time a thorough root-cause analysis requires on the other.

So it is important for Boeing to communicate candidly and honestly – and empathetically – both with airlines and passengers as the accident investigation and product improvement process moves along.

The video statement by Boeing’s chief executive is a good step in that direction.