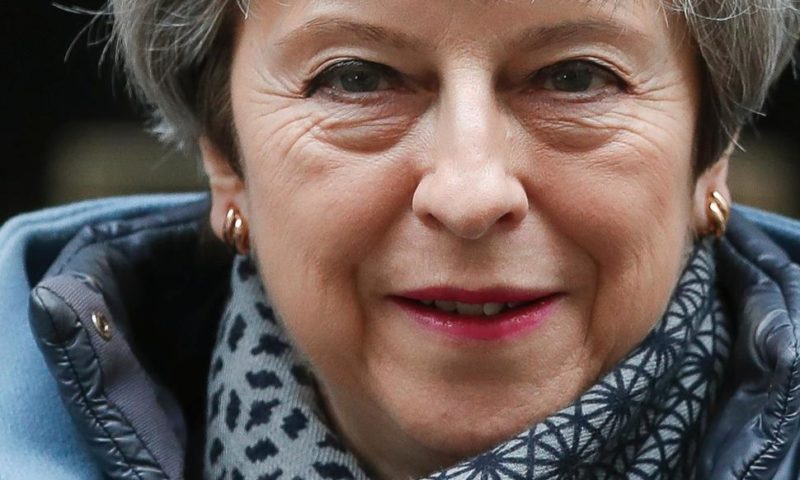 British Prime Minister Theresa May has acknowledged the failure of strategies to get her Brexit deal approved in Parliament, saying there’s little prospect lawmakers will back it in “the near future.”.

LONDON — British Prime Minister Theresa May acknowledged that the government’s strategies to get her Brexit deal approved in Parliament failed, saying Saturday there’s little prospect lawmakers will back the thrice-rejected divorce agreement “in the near future.”

With the U.K. once again days away from a deadline for leaving the European Union, May pressured opposition lawmakers to help her find a compromise agreement instead, saying voters “expect their politicians to work together when the national interest demands it.”

After May’s deal with the EU out for a third time in the House of Commons, the prime minister invited the opposition Labour Party this week to discuss alternatives. But three days of talks ended with no agreement and the left-of-center Labour accusing May’s Conservative government of not offering real change.

Labour favors a softer form of Brexit than the government has advocated. The party says Britain should remain closely bound to EU trade rules and maintain the bloc’s standards in areas such as workers’ rights and environmental protection.

Britain is due to leave the EU on Friday unless May can secure another delay from the EU, which already agreed to postpone the Brexit day originally set for March 29.

May now is asking for Britain’s departure to be pushed back until June 30, hoping to reach a compromise with Labour and a deal through Parliament in a matter of weeks.

“The longer this takes, the greater the risk of the U.K. never leaving at all,” May said in a statement.

But EU leaders favor a longer delay to avoid another round of cliff-edge preparations and politics. And they say the U.K. needs to put forward a concrete plan to end the stalemate to get any further postponement.

An extension requires unanimous approval from the 27 remaining leaders, some of whom are fed up with Brexit uncertainty and reluctant to prolong it further.

Last month, the EU gave Britain until April 12 to approve the withdrawal agreement it reached with the May’s government, to change course and seek a further delay to Brexit, or to crash out of the EU with no deal in place or transition period to cushion the shock.

The leaders of EU member countries are due to meet in Brussels Wednesday — two days before the April 12 deadline — to consider Britain’s request for a second extension.

Economists and business leaders have warned a no-deal Brexit would severely disrupt trade and travel, with tariffs and customs checks causing gridlocked British ports and possible shortages of some foods, medicines and other products.

Worries about a chaotic British exit are especially acute in Ireland, the only EU member that shares a land border with the U.K. Any customs checks or other obstacles along the currently invisible frontier would hammer the Irish economy and could undermine Northern Ireland’s peace process.

Irish Prime Minister Leo Varadkar said Saturday that it was “extremely unlikely” any of the 27 countries would veto a delay.

“If one country was to veto an extension and, as a result, impose hardship on us, real problems for the Dutch and Belgians and French as neighboring countries (to the U.K.)…they wouldn’t be forgiven for it,” he told Ireland’s RTE radio.

Germany’s economy: Should we be worried?