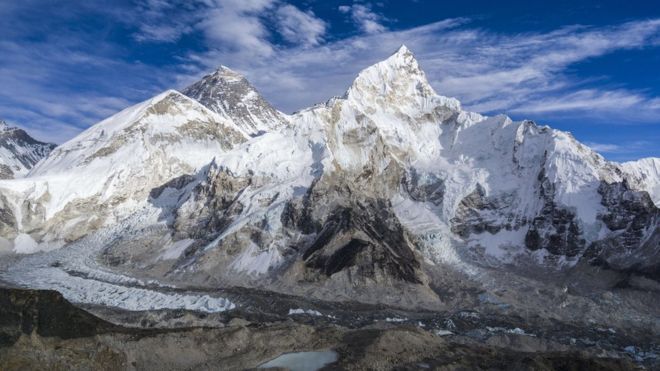 Expedition operators are concerned at the number of climbers’ bodies that are becoming exposed on Mount Everest as its glaciers melt.

Nearly 300 mountaineers have died on the peak since the first ascent attempt and two-thirds of bodies are thought still to be buried in the snow and ice.

Bodies are being removed on the Chinese side of the mountain, to the north, as the spring climbing season starts.

More than 4,800 climbers have scaled the highest peak on Earth.

“Because of global warming, the ice sheet and glaciers are fast melting and the dead bodies that remained buried all these years are now becoming exposed,” said Ang Tshering Sherpa, former president of Nepal Mountaineering Association.

“We have brought down dead bodies of some mountaineers who died in recent years, but the old ones that remained buried are now coming out.”

And a government officer who worked as a liaison officer on Everest added: “I myself have retrieved around 10 dead bodies in recent years from different locations on Everest and clearly more and more of them are emerging now.”

Officials with the Expedition Operators Association of Nepal (EOAN) said they were bringing down all ropes from the higher camps of Everest and Lhotse mountains this climbing season, but dealing with dead bodies was not as easy.

They point at Nepal’s law that requires government agencies’ involvement when dealing with bodies and said that was a challenge.

“This issue needs to be prioritised by both the government and the mountaineering industry,” said Dambar Parajuli, president of EOAN.

“If they can do it on the Tibet side of Everest, we can do it here as well.”

In 2017, the hand of a dead mountaineer appeared above the ground at Camp 1.

Expedition operators said they deployed professional climbers of the Sherpa community to move the body.

The same year, another body appeared on the surface of the Khumbu Glacier.

Also known as the Khumbu Icefall, this is where most dead bodies have been surfacing in recent years, mountaineers say.

Another place that has been seeing dead bodies becoming exposed is the Camp 4 area, also called South Col, which is relatively flat.

“Hands and legs of dead bodies have appeared at the base camp as well in the last few years,” said an official with a non-government organisation active in the region.

“We have noticed that the ice level at and around the base camp has been going down, and that is why the bodies are becoming exposed.”

Several studies show that glaciers in the Everest region, as in most parts of the Himalayas, are fast melting and thinning.

A study in 2015 revealed that ponds on the Khumbu Glacier – that climbers need to cross to scale the mighty peak – were expanding and joining up because of the accelerated melting.

Nepal’s army drained the Imja Lake near Mount Everest in 2016 after its water from rapid glacial-melt had reached dangerous levels.

Another team of researchers, including members from Leeds and Aberystwyth universities in the UK, last year drilled the Khumbu Glacier and found the ice to be warmer than expected.

The ice recorded a minimum temperature of only −3.3C, with even the coldest ice being a full 2C warmer than the mean annual air temperature.

Not all dead bodies emerging from under the ice, however, are because of rapid glacial meltdown.

Some of them get exposed also because of the movement of the Khumbu Glacier, mountaineers say.

“Because of the movement of the Khumbu Glacier, we do get to see dead bodies from time to time,” said Tshering Pandey Bhote, vice president of Nepal National Mountain Guides Association.

“But most climbers are mentally prepared to come across such a sight.”

Some of the dead bodies on the higher altitude sectors of Mount Everest have also served as landmarks for mountaineers.

One such waypoint had been the “green boots” near the summit.

They were a reference to a climber who died under an overhanging rock. His green boots, still on his feet, faced the climbing route.

Some climbing experts said the body was later removed while Nepal’s tourism officials said they had no information on whether the remains are still visible.

Recovering and removing bodies from the higher camps can be both expensive and difficult.

“One of the most challenging recoveries was from the height of 8,700m, near the summit,” said Ang Tshering Sherpa, the former president of NMA.

“The body was totally frozen and weighed 150kg and it had to be recovered from a difficult place at that altitude.”

Experts say any decision over what to do with a dead body on the mountain is also a very personal issue.

“Most climbers like to be left on the mountains if they died,” said Alan Arnette, a noted mountaineer who also writes on mountaineering.

“So it would be deemed disrespectful to just remove them unless they need to be moved from the climbing route or their families want them.”

Pentagon May Cut Poland Construction to Pay for Trump’s Wall