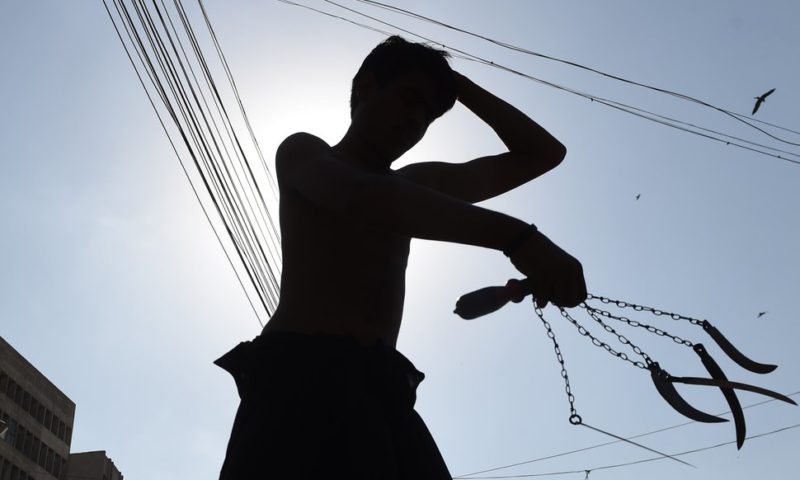 The practice can lead to the spread of a deadly blood-borne virus that can cause cancer.

RESEARCHERS WARN THAT the practice of self-flagellation could lead to the spread of a potentially deadly blood-borne virus that can cause cancer.

The study, published Wednesday in the Centers for Disease Control and Prevention’s Emerging Infectious Diseases journal, examined 10 cases of human T-cell lymphotropic virus type 1 (HTLV-1) infection associated with the religious discipline of piercing the body in 10 men living in the United Kingdom. All 10 were of Pakistani, Indian or Iraqi descent, and all were diagnosed since 2013.

“It is likely that either sharing blood-stained blades, reusing personal equipment after inadequate cleaning with a shared disinfectant, contact of infected blood with open wounds, or contact with infected medical equipment resulted in HTLV-1 transmission,” the study said. “All 10 men had asymptomatic HTLV-1 infections, but two men had a high proviral load (more than 1percent), which places them at risk for HTLV-associated disease.”

HTLV-associated diseases include the development of the adult T-cell leukemia lymphoma, a rare cancer of the immune system’s T-cells, or myelopathy, a deadly spinal cord injury. The virus can be transmitted sexually, by contaminated blood products, by organ transplantation or from mother to child, the study notes. Of the 10 case studies, eight reportedly shared flagellation equipment.

There are an estimated 5 to 10 million HTLV-1 infections worldwide, though researchers note this approximation is likely an underestimate as 85 percent of the general population has not been tested for it.

“In the United Kingdom, clinics that screen for these viruses (antenatal and sexual health settings) do not ask about the practice and do not screen for HTLV. We propose that self-flagellation be added to the list of risk factors that result in testing for bloodborne viruses, including HTLV-1,” the study authors conclude.

The study authors also suggested blood transfusion services screen for this practice when assessing potential blood donors, as six men in the study learned of their diagnosis through blood donation.

US Health Officials Move to Tighten Sales of E-Cigarettes