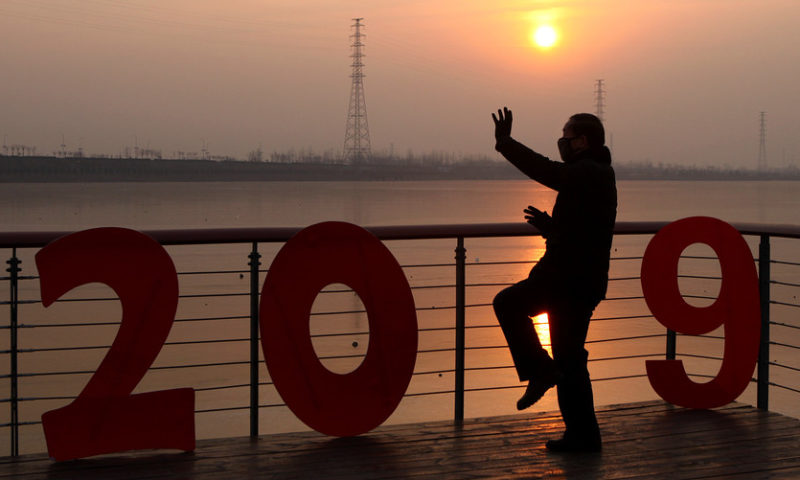 U.S. stocks kick off 2019 on a positive note in volatile session

U.S. stocks closed the first session of the year on a positive note after volatile trading Wednesday, as a rebound by oil prices and worries about softer global growth vied for market dominance.

Major markets were closed on Tuesday for the New Year holiday.

Investors kicked off the new year with more angst, driven by fears over the health of the world’s second-largest economy, China, which has fueled an aversion to assets perceived as risky early in the day.

Beijing’s official read of manufacturing for December, released Wednesday, showed a more severe drop than one issued earlier, reflecting a fall to the weakest level since February 2016.

The Caixin manufacturing purchasing managers index fell to 49.7 in December. A reading below 50 signals a contraction in activity, the first in 2 1/2 years.

Growth in Germany’s manufacturing sector slowed, according to Markit’s purchasing manager’s index, which fell to a 33-month low of 51.5, further raising concerns about a global economic slowdown that investors worry could spill over into the U.S.

The economic softness comes as investors are concerned about a protracted tariff dispute between Beijing and Washington, which analysts have said could aggravate a retrenchment in both economies.

Market participants also are watching a partial U.S. government shutdown that is nearing its second week as President Donald Trump mets with top lawmakers to discuss reopening the government by resolving a dispute over funding for the expansion of the U.S.-Mexico border wall.

Still, some market observers cautioned against reading too much into the oil market’s rebound.

On the data front, the final reading of IHS Markit’s U.S. Purchasing Manager’s Index for the month of December, came in at 53.8, versus expectations of 53.9, according to FactSet data.

“In the past, government shutdowns haven’t really affected markets,” Sam Stovall, chief investment strategist for U.S. equities at CFRA Research, told MarketWatch. If Congress and the White House are able to come to an agreement to end the partial shutdown soon, that should hold true, Stovall predicted.

“But today’s selloff could be attributed to the perceived lack of leadership in Washington,” he said, as the shutdown underscores what could be a year of increased policy uncertainty, including questions surrounding U.S. trade policy.

The post-Christmas “melt-up” markets experienced in recent days is being “unwound a bit,” wrote Joel Kulina, analyst at Wedbush Securities in a note to clients.

“Given global growth concerns and lingering uncertainty from trade/tariff wars, have to think investors will adopt a more cautious approach to 2019 to get a sense of when or where we may find a bottom,” he wrote.

Tesla Inc. TSLA, -6.81% sank 6.8% after the electric-car manufacturer announced fourth-quarter deliveries below analysts expectations, while also saying that it would cut the price of its Model S, Model X and Model 3 by $2,000.

Shares of Sirius XM Holdings Inc. SIRI, +3.33% were up 3.3% after JPMorgan upgraded the stock to overweight from underweight.

How did other markets perform?
Asian markets closed sharply lower with Hong Kong’s Hang Seng Index HSI, +0.27% leading the way with a 2.8% decline while the Shanghai Composite SHCOMP, +0.26% fell 1.2%.

Gasoline prices could jump 35% by May, forecast says