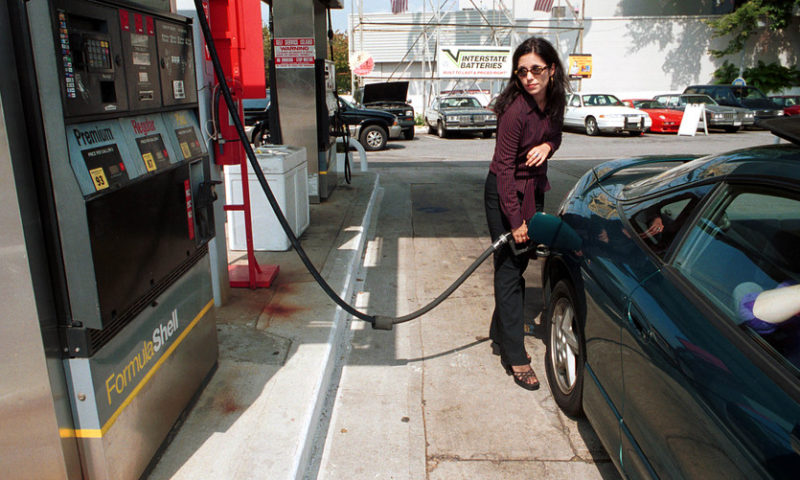 Gasoline prices at the pump have dropped to their lowest in about a year and half, but could jump by 35% as soon as May, with output cuts by major oil producers expected to boost the price of oil, according to gasoline-price tracker GasBuddy.

The national average price for gallon of gasoline got its lowest start to a year since 2016, “when the national average was also near free fall and eventually hit $1.66 a gallon, said Patrick DeHaan, head of petroleum analysis at GasBuddy.

At an average of $2.229 Wednesday afternoon, gasoline prices were at their cheapest since July 2, 2017, he said, adding that a price of $2.22 would be the lowest since President Donald Trump entered office.

Prices have declined “nearly every day for the last 80 or so,” DeHaan said. “Americans are spending $260 million less on gasoline today than they did some 80 days ago.”

GasBuddy’s 2019 gasoline forecast released Wednesday shows gasoline averaging $2.70 a gallon this year. That would mark a modest three-cent decline from the average for 2018.

In a tweet early Wednesday, President Donald Trump said the low gas prices “are like another Tax Cut!”

Trump’s actions on trade with China will have a big impact on retail prices for gasoline, said DeHaan. “I really see his decision playing a decent size role,” he said, with a China trade deal being “big enough to push the economy up or down, depending on specifics.”

He also doesn’t expect the low prices to hold for long. “While the bargain basement gas prices we’ve been seeing in areas across the country have been terrific and most welcomed, the party at the pump will likely wrap up in the next month or two, and prices will begin to rally as OPEC production cuts and a strong U.S. economy push gas prices back up,” DeHaan said.

Oil prices fell sharply in the fourth quarter of last year, with both Brent LCOH9, -0.73% , the global benchmark, and West Texas Intermediate crude CLG9, -1.68% , the U.S. standard bearer, slumping into a bear market after hitting a nearly four-year high in early October.

At a meeting in December, the Organization of the Petroleum Exporting Countries and some nonmember producers, including Russia, agreed to cut production by 1.2 million barrels from October 2018 levels, effective as of January 2019, for an initial period of six months. They plan to review output levels in April.

Against that backdrop, GasBuddy expects average gasoline prices to creep up to $2.58 in March, and warned that “the national average could surge to over $3 per gallon as soon as May, with potential average of $2.97 that month. That would be a rise of roughly 35% from Wednesday’s level.

“While the national average failed to hit $3 last year, we have an even stronger possibility of seeing that ugly possibility, which would push prices in some places from $1.99 today to over $3 this spring, which would be an impressive and shocking turnaround in just a few months,” said DeHaan.

“One caveat, however, that may have motorists unexpectedly spending less is what happens in the White House,” he added. “Should all the darkest realities come to fruition, it could lead to a slowdown in the economy and take gas prices right along with it.”

“As goes the economy, as go gas prices in the year ahead,” he said. “Buckle up for the extra volatility we’re going to see. It could be nauseating.”

U.S. stocks kick off 2019 on a positive note in volatile session

The five coolest aerospace innovations of 2018