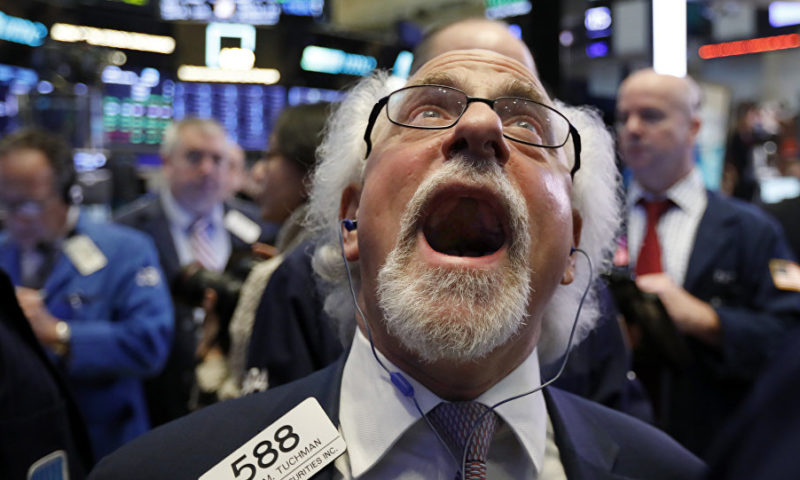 After a decade of achingly slow rebuilding following the 2008 collapse, markets are suddenly seeing their worst returns in ten years.

After a hectic trading day on Friday, US stocks ended where they began, capping off a crazy week as both global and American equity markets are now on track to mark their worst year in a decade, according to reports.
As big-ticket investors pointed to market volatility projected to continue into 2019, government bonds were seen to be a safe haven, in spite of the lowest yield level since February 2018.

Wall Street watchers concerned about the outlook for monetary, economic and political policy contributed last week to the worst Christmas Eve trading day in the history of the market, according to multiple reports.

The head-snapping twists and turns of US markets in particular appeared “almost surreal in terms of the moves,” according to Fidelity Investments executive Jurrien Timmer, cited by the Financial Times.

Many have attributed the sharp changes within the markets to algorithm and computer-based trading methods coming into play as large numbers of Wall Street employees go on holiday.
Regardless of the real reasons, 2018 is projected to be the benchmark US index’s worst year since the global 2008 financial crisis, even as the twists in American investment has affected markets in London, continental Europe and Asia, with the FTSE All-World index down a significant 11.8 percent since January, according to Ft.com.

Japan’s Nikkei index was down 12 percent at the year-end close and the Shanghai Composite posted a whopping 24.6 percent drop for 2018.

Cash-heavy investors saw the drops as an opportunity, however.

“Investors who have money to put to work and are willing to take the risk,” stated State Street Global Advisors chief investment strategist Michael Arone, will see the current markets as “a good buying opportunity,” cited by the Financial Times.

“If you take a step back and look at what is expected for 2019, many of the attributes that exist have existed throughout the bull market: the economy is expected to grow at 2.5 percent and earnings at 8 percent, while both inflation and interest rate expectations remain low,” Arone suggested.

But many investors are playing their cards closer to their chest due, in part, to increasing interest rates in the US, the ongoing US-China trade fight, a US government shutdown and rumors that US President Donald Trump may dismiss Federal Reserve chairman Jay Powell.

A recent tweet by current US Treasury secretary Steven Mnuchin did nothing to relax investors, as the Trump appointee’s misplaced claims appeared to come out of left field, answering a question that no one had asked.