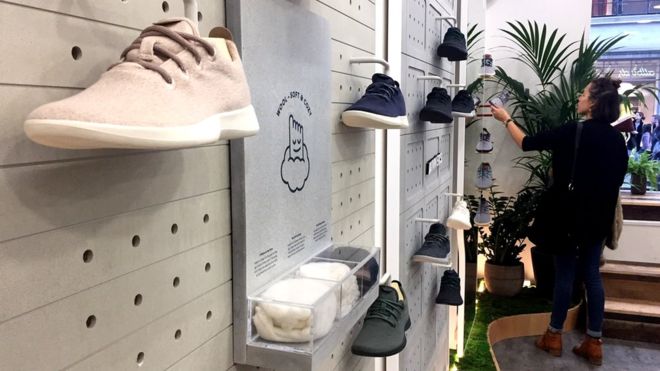 Four years ago Joey Zwillinger was an executive at a “hot” biotech company and making good money.

So when he decided to leave to join a start-up making trainers out of wool, friends and family were bemused.

“They naturally said I was quite dumb,” he says. And that was among the more polite reactions.

Why would anyone want to go into an industry where giants like Nike and Adidas deploy vast marketing budgets and roll out thousands of designs a year?

But for Mr Zwillinger and his co-founder Tim Brown, the creation of Allbirds was not quite the crazy leap of faith that it seemed back in 2014.

The economics of making and selling trainers (or sneakers to many outside the UK) had been changing.

Making trainers is not as profitable as you might think.

Rahul Cee trained as a footwear designer and had a long career in the industry, working for Nike and Vans in India. He now runs his own website, Sole Review, which – as the name suggests – reviews running shoes.

Using publicly available data he estimated how the costs break down for a typical pair of trainers.

According to his calculations, the final sale price is made up of:

Newcomers like Allbirds can skip the last part of the process.

“We decided early on that we were only going to do direct-to-consumer, not sell our shoes through the wholesale channel – through retailers,” says Mr Zwillinger. “We didn’t quite realise how smart a move that was at the time.”

So Allbirds sold shoes online and has only recently opened its own stores.

“Other shoemakers are giving away so much margin to the stores that sell their shoes and they are not able to invest in quality material for their product.

“They’re also on discount all the time. So then that forces them to go quick with speed and style changes.”

The big shoemakers are not blind to the cost of retailing their wares.

In 2017 Nike announced it was radically cutting back on the number of retailersit uses and set a target to generate 30% of its sales online by 2022.

It is not just the way shoes are sold that has changed. Customers are demanding different sorts of shoes.

“Shoes that are meant for performance, like running or basketball, are really out of fashion and people are buying shoes that are athletically inspired but not intended for a particular sport,” says Matt Powell, senior industry adviser for sports at the NPD group, a retail consultancy firm.

“Now that we are in this athleisure phase, where we’re not really requiring that the shoes have technology in them for cushioning or whatever, it’s easier for smaller brands to break into the market.”

Allbirds, which has just opened a store in London’s Covent Garden, has been one of the companies that has benefitted from that trend.

“The fact that no-one’s tethered to a desk means that their wardrobes are not tethered to an office environment and that’s driven a change in wardrobe that makes everyone less formal,” Joey Zwillinger says.

“Shoes need to aesthetically work for a number of different activities – when you’re at work and also at dinner. They also need to be comfortable for a longer period of time.”

And that shift away from shoes used for sport to everyday activities has helped save money on marketing.

In 2015 Nike signed a lifetime endorsement deal with basketball superstar Lebron James, reported to be worth $1bn (£800m). But those big deals are becoming less important.

“Earlier, things like athletic endorsement were the focus – like signature shoe models based on basketball players,” says Rahul Cee.

If you are wearing trainers now, take a look at them. Are they made of several pieces of fabric stitched together? That’s the traditional way of making the upper part of a shoe and it’s labour-intensive.

Shoemakers have been introducing upper parts that can be knitted as one piece and then joined to the sole. Half of Allbirds’ shoes are made this way.

The big shoemakers have also been moving in that direction. Nike introduced its Flyknit Racer in 2012 and has been automating more of its production.

And this year Adidas opened its second highly automated plant, in the US state of Georgia.

Despite the innovation, shoemakers should keep it simple, says Mr Cee.

His best-selling shoe while working in the Indian trainer business? A Nike-branded sandal.