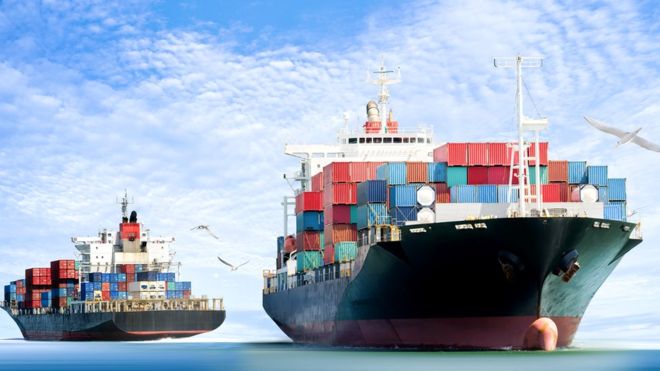 The final weeks of 2018 have been dramatic, to say the least.

Global stock markets are roiling, disturbed in part by the anti-free market trade sentiment that continues to roll-out of Washington.

Looking ahead to the new year, however, pro-free trade movements in Europe and in Asia are progressing.

Two major agreements are about to come into effect that will bring together some of the world’s biggest trading areas and economies.

And they exclude the world’s two biggest economies, the US and China, who are engaged in their own trade war.

What are free trade agreements?

Tariffs are a form of tax, like a border tax.

They are placed on goods coming into a country for a range of reasons, sometimes to try and protect a home-made product.

They get rid of quotas too, so there is no limit to the amount of trade you can do.

FTAs also help make a country’s exports cheaper and give easier entry to other markets.

They come in all sorts of forms and with different rules but in short, they make trade between countries as liberal as possible and allow for more rules-based competition.

The first new trade agreement to come into effect in 2019 is the Comprehensive and Progressive Agreement for Trans-Pacific Partnership, or CPTPP.

It was known as the Trans Pacific Partnership until the US pulled out.

CPTPP now covers a market of nearly 500 million people and the economies included account for about 13% of the world’s GDP.

Importantly, it removes tariffs on an estimated 95% of goods traded between member countries.

On 30 December, it will come into force for the nations that have completed their ratification processes: Australia, Canada, Japan, Mexico, New Zealand and Singapore.

For Vietnam, the big day is on 14 January and for the others it goes ahead 60 days after they complete their own ratifications.

While all that is going on, another big FTA is expected to come into effect on 1 February.

The EU-Japan Economic Partnership Agreement will create an open trading zone covering a market of more than 600 million people and nearly one third of the world’s GDP.

It has been in the making since 2013 and is the first trade deal to include an explicit reference to the Paris Agreement.

It strengthens the EU and Japan’s commitments around climate change and sustainable development.

These two deals are in stark contrast to the US’s increasingly protectionist policies.

They are regarded by some as being vitally important to the future of free and fair global trade.

Furthermore, the world’s third largest economy – Japan – is involved in both of them.

Japan has not, in the past, been very active in free trade talks internationally, but that has changed with both CPTPP and the EU-Japan EPA.

Also, after the US pulled out of TPP, Japan led the negotiation efforts to bring the new CPTPP together.

“[Japan has] historically been the largest economy that has been the least enthusiastic for liberalisation, and now it’s stepping up and liberalising in the Pacific and the EU,” he says.

“They have said ‘we have to open up our economy, we have got to globalise, we have to liberalise’. So it’s a huge win for them,” he adds.

“He was proactively engaged in this whole effort and I think he saw that this was vitally important for Japan,” he says.

“Some Japanese products really are top class, but I think we have to be a little bit more innovative and see how they can be marketed, not just in Japan but in other countries as well.”

The change in Japan’s approach to free trade has been a gradual evolution.

Mr Yamazaki says: “I think we have learned many things over the years and we see now that [free trade] is definitely in the interests of Japan.

“Our country does not produce natural resources. Our strength is that we have people – a quite well-educated population that is fairly diligent in doing things. And in order to utilise that asset, we do have to have interaction with the outside world, and that definitely means free trade, and creating a more liberalised investment climate.”

Deborah Elms, head of the Asian Trade Centre in Singapore, says that the companies who will benefit the most from CPTPP when it comes into force on 30 December are those that have been paying attention to the pact and what it will offer them.

Also, because CPTPP is not a typical free trade agreement, she says, but rather a deep and interlocking one it may have taken some firms by surprise, particularly with its partial enactment at this time of year.

But she says for the businesses who have been paying attention, the benefits will be immediate.

“Despite doubts from many quarters, companies and consumers will start receiving benefits within days,” she says.

“Not only does the entire agreement begin on the first day, but most firms will get double tariff cuts by January 1, 2019.”

Sneakernomics: All change in the trainer business