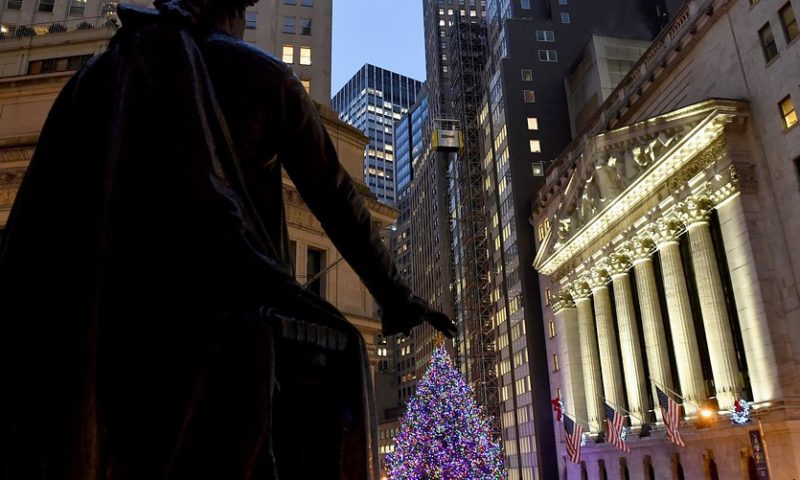 U.S. stock futures pushed higher Wednesday, as Wall Street attempted to bounce back after the worst Christmas Eve trading session in the history of the stock market.

Stocks saw an early close Monday and were closed Tuesday for Christmas Day.

Another negative session Wednesday would mark five straight losing sessions, and last week marked the worst week of trading since the 2008 financial crisis. The Nasdaq officially entered bear-market territory on Friday, and is now off 23.6% from its record close set Aug. 29. The S&P is down 19.8% from its Sept. 20 record close, and the Dow has slid 18.8% from its Oct. 3 record close.

With many traders out for the holidays, volumes are expected to be thinner and moves could be exaggerated. Monday’s dramatic session came after Treasury Secretary Steven Mnuchin tweeted that he had spoken with the CEOs of the country’s six biggest banks to assess the health of the banking system, raising concerns that the administration knows something the market doesn’t.

CNN, citing a source close to the White House, reported that Mnuchin could be in “serious jeopardy” from an increasingly frustrated U.S. President Donald Trump, who has been publicly supportive of his top cabinet member. Mnuchin supported the appointment of Jerome Powell as chairman of the Federal Reserve, whose monetary policy decisions have come under repeated criticism by Trump. However, a White House source told CNN that Mnuchin’s job was not on the line.

“They’re raising rates too fast because they think the economy is so good. But I think they will get it pretty soon. I really do,” said Trump in his Christmas message on Tuesday, of the Fed. Some blamed accelerated losses on Monday on a tweet by Trump, who blamed the Fed for the stock drop.

Meanwhile, parts of the federal government remain shut down as lawmakers in Washington tussle over funding for Trump’s proposed border wall. Trump also said Tuesday that the government will not reopen until “we have a wall, fence, whatever they like to call it.

Japan’s Nikkei 225 index NIK, +0.89% closed up 0.9% on the heels of a 5% slump Tuesday in reaction to Wall Street’s losses. China’s Shanghai Composite SHCOMP, -0.26% fell 0.3%. European stock markets are closed and will reopen Thursday after an extended holiday break.