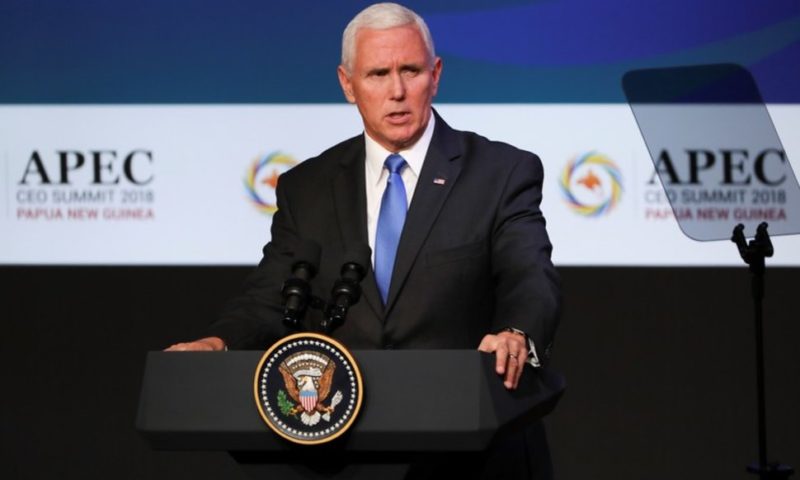 PORT MORESBY – The United States will not back down from its trade dispute with China, and might even double its tariffs, unless Beijing bows to U.S. demands, Vice President Mike Pence said on Saturday.

In a bluntly worded speech at an Asia Pacific Economic Co-operation (APEC) summit in Papua New Guinea, Pence threw down the gauntlet to China on trade and security in the region.

“We have taken decisive action to address our imbalance with China,” Pence declared. “We put tariffs on $250 billion in Chinese goods, and we could more than double that number.”

“The United States, though, will not change course until China changes its ways.”

The stark warning will likely be unwelcome news to financial markets which had hoped for a thaw in the Sino-U.S. dispute and perhaps even some sort of deal at a G20 meeting later this month in Argentina.

U.S. President Donald Trump, who is not attending the APEC meeting, is due to meet Chinese President Xi Jinping in Argentina.

Pence’s warning on Saturday contrasted with remarks made by Trump on Friday, when he said he may not impose more tariffs after China sent the United States a list of measures it was willing to take to resolve trade tensions.

Trump has imposed tariffs on $250 billion worth of Chinese imports to force concessions on a list of demands that would change the terms of trade between the two countries. China has responded with import tariffs on U.S. goods.

There was no hint of compromise from Pence.

“China has taken advantage of the United States for many years. Those days are over,” he told delegates gathered on a cruise liner docked in Port Moresby’s Fairfax Harbour.

He also took aim at China’s territorial ambitions in the Pacific and, particularly, Xi’s Belt and Road Initiative to expand land and sea links between Asia, Africa and Europe with billions of dollars in infrastructure investment.

While not referring directly to Chinese claims over various disputed waters in the region, Pence said the United States would work to help protect maritime rights.

“We will continue to fly and sail where ever international law allows and our interests demand. Harassment will only strengthen our resolve.”

Just minutes earlier, Xi had spoken at length about his initiative and the need for free trade across the region.

“It is not an exclusive club closed to non-members, nor is it a trap as some people have labeled it,” Xi said of his brainchild project.

He also called protectionism a “shortsighted approach” that was “doomed to fail”.

“History has shown that confrontation, whether in the form of a Cold War, hot war, or trade war will produce no winners,” said Xi.