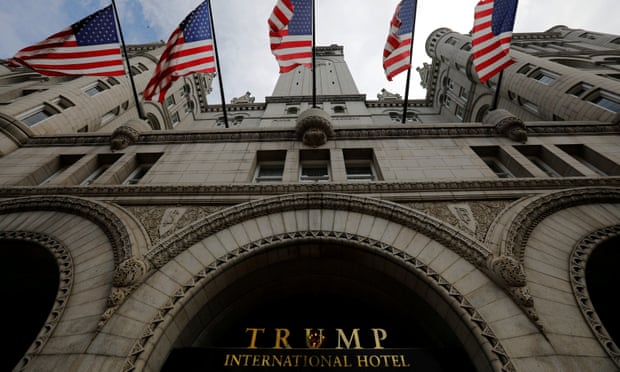 A federal judge has denied the justice department’s efforts to halt legal proceedings in a case in which Donald Trump is accused of violating the US constitution, opening the door for the president’s critics to gain access to financial records related to his Washington DC hotel.

Such records could include income tax returns which Trump has refused to release to public scrutiny.

Trump has been fighting multiple lawsuits that argue foreign representatives spending money at the Trump International Hotel is a violation of the constitution’s emoluments clause, which bans federal officials from accepting benefits from foreign or state governments without congressional approval.

In an attempt to stop the case moving on to legal discovery – which could unearth financial records such as tax returns – justice department lawyers asked Maryland-based US district judge Peter Messitte to put the case on hold while they appeal his decision to a higher court in Richmond, Virginia. They failed.

“This is another major win for us in this historic case,” said District of Columbia attorney general Karl Racine in a statement on Friday. “Our next step is to proceed with discovery. We will soon provide the court a new schedule to begin the process of getting information about how President Trump is profiting from the presidency.”

The plaintiffs, Maryland and the District of Columbia, have said they plan to move forward quickly with discovery, seeking information and financial records primarily from third parties rather than the government.

A clue as to what they may request can be found in preservation subpoenas filed more than a year ago with 23 Trump-related entities, including the Donald J Trump Revocable Trust, the Trump Organization, the Mar-a-Lago Club and entities related to his DC hotel.

A schedule of legal discovery is due in 20 days and it could begin quickly thereafter, depending on what is agreed by all parties.

Though the case has been narrowed to focus on Trump’s Washington hotel, “that hotel is a nexus for a far-flung web of foreign and domestic emoluments,” said Norman Eisen, former Obama administration ethics czar and now chair of Citizens for Responsibility and Ethics in Washington, which is co-counsel with the two jurisdictions.

In a sometimes blistering 31-page opinion released on Friday, Messitte wrote: “It is clear that the president, unhappy with the court’s reasoning and conclusion, merely reargues that his interpretation of the emoluments clauses should apply instead of the one the court gave. The court sees no point in stating again why it concluded as it did.”

DoJ spokeswoman Kelly Laco said the department “disagrees with and is disappointed” by Messitte’s ruling. She added: “This case, which should have been dismissed, presents important questions that warrant immediate appellate review.”

Justice lawyers objected to any discovery on a sitting president in his official capacity, in order to avoid a “constitutional confrontation” between two branches of government. They argued that the “public interest is decidedly in favor of a stay because any discovery would necessarily be a distraction to the president’s performance of his constitutional duties”.

The president could seek to have the appeal heard by a higher court, an “extraordinary remedy”, according to the justice department’s website, that “should only be used in exceptional circumstances of peculiar emergency or public importance”.

The emoluments clause has never been fully tested. Two other lawsuits accusing the president of violating it are being heard in federal courts. Neither has reached the discovery stage.

Plaintiffs argue that Trump – who has declined to divest from his assets as president – is capitalizing on the presidency and causing harm to businesses trying to compete with his Washington hotel, which is just steps from the White House.

The justice department has said earnings from business activities, including hotel room stays, do not qualify as emoluments. Its attorneys have argued that under Maryland and DC’s interpretation, no federal official would even be able to own stock from a foreign company that provides profits or collects royalties.

Messitte pushed back in his opinion against any delaying tactics by the president and his lawyers.

“There is genuine concern on the part of plaintiffs,” he wrote, “indeed the court shares it, that if the president is permitted to appeal the court’s decisions in piecemeal fashion, ultimate resolution of the case could be delayed significantly, perhaps for years” – especially because it’s likely the president would appeal any negative decisions up to the supreme court.

“That, as a matter of justice, cannot be countenanced.”