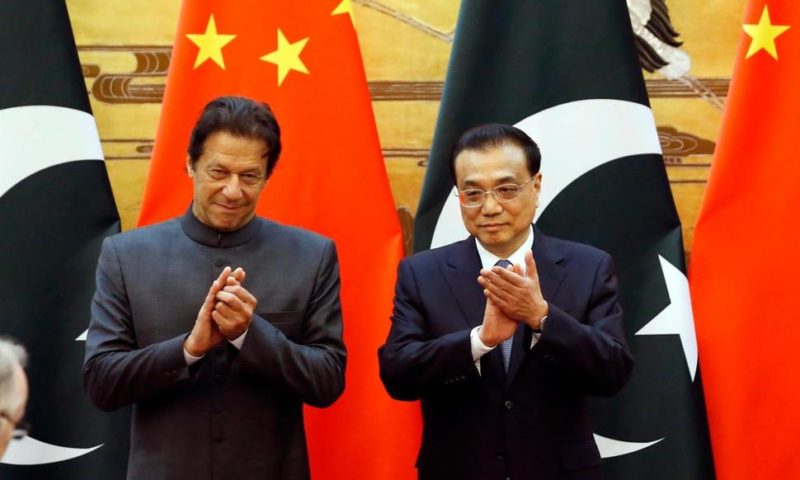 Close ally China says it is willing to offer assistance to Pakistan to help it weather its current fiscal crisis but that terms of such aid are still being discussed.

BEIJING — Close ally China said Saturday it was willing to offer assistance to Pakistan to help it weather its current fiscal woes but that terms of such aid are still being discussed.

Pakistan has taken out billions of dollars in loans from China in recent years, the terms of which remain largely undisclosed. China has pledged a total of more than $60 billion to Pakistan in the form of loans and investments for roads, ports, power plants and industrial parks to build what is termed the “China-Pakistan Economic Corridor.”

Following Li’s meeting with Khan, Vice Foreign Minister Kong Xuanyou said the sides had “made it clear in principal that the Chinese government will provide necessary support and assistance to Pakistan in tiding over the current economic difficulties.

“As for the specific measures to be taken, the competent authorities of the two sides will have detailed discussions,” Kong told reporters.

And despite Pakistan’s looming balance of payments crisis, Kong said there were no plans to scale back the economic corridor, known as CPEC, although he did say it would be altered somewhat to “tilt in favor of areas relating to people’s lives.”

“There’s been no change in the number of CPEC projects. If there were to be any change, it would be an increase going forward,” he said.

In response to the debt crisis, Pakistan is seeking an emergency bailout loan of $8 billion from the International Monetary Fund, which plans to send a team to Islamabad to assess the situation. It is also seeking new loans from Saudi Arabia and China. Discussions of the new funding were expected to dominate Khan’s visit.

Further complicating matters, the United States, which strongly influences the IMF, has said it will not finance the repayment of Pakistan’s Chinese loans.

Pakistani media earlier reported China was preparing a $6 billion package of aid, including loans and additional investment for CPEC.

The issue did not come up in opening remarks between Li and Khan. Li said the former cricket star’s visit would “further consolidate and develop the firm, enduring ties between our two countries.”

Khan responded by saying that CPEC had evolved from the concept stage to showing tangible results “on the ground” that have “caught the imagination of the people of Pakistan.

“We feel that this is a great opportunity for our country to progress, to attract investment. It gives us an opportunity to raise our standard of living (and) growth rate,” Khan said.

China and Pakistan refer to themselves as “all-weather friends,” united in their shared rivalry with mutual neighbor India. Pakistan has been among the most enthusiastic supporters of the trillion-dollar Belt and Road initiative, which seeks to re-establish China’s former role as the Asian center of global trade by binding it to Europe, African, Southeast Asia and elsewhere through Chinese-financed projects.

Faced with public anger over the rising cost of basic goods, Khan had initially vowed to curb borrowing, but has since proceeded with ambitious projects such as the construction of 5 million public housing units.

However, some aspects of CPEC are undergoing change, including scaling back the development of Pakistan’s Arabian Sea port of Gwadar. Agreements with Chinese power companies to supply much-needed electricity to energy-starved Pakistan have also been loudly criticized over the revolving debt costs to Pakistan.