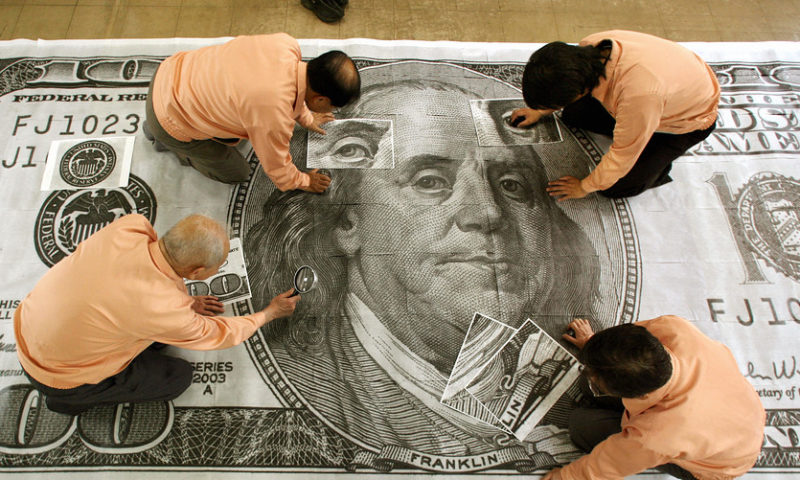 The data calendar included eurozone consumer price inflation, which met expectations with a 2.2% increase on the year, and China’s October manufacturing purchasing managers index, which slowed to 50.2, versus 50.6 expected. A PMI above 50 indicates growth, and the October read indicated that growth in activity is nearly flat.

“Chinese markets performed well overnight while the yuan continued to flirt with the seven handle against the dollar. This is seen by many as being a psychologically important level for the currencies, a break of which could propel it much further, potentially causing further tensions between the two countries,” wrote Craig Erlam, senior market analyst at Oanda, in a note.

The ICE U.S. Dollar Index DXY, -0.30% was last little changed at 97.134. On the last trading day of October, the gauge is looking at a 2.1% monthly gain, its best performance since May, according to FactSet.

Meanwhile in the U.K., the British pound GBPUSD, +0.7833% shot higher after a letter by chief Brexit negotiator Dominic Raab was published in which he said he expected to reach a deal with the European Union by Nov. 21. Sterling last bought $1.2766, up from $1.2707 late Tuesday in New York. For the month, the pair, also known as cable, was down 2%.

Elsewhere, the Bank of Japan left its monetary policy unchanged late Tuesday but scaled back the number of days on which it will buy shorter dated bonds while increasing the amount it can buy. The BOJ is widely considered the most dovish among developed world central banks, and with Japanese inflation running solidly below the 2% annual target, its easy-monetary-policy approach isn’t expected to change soon.

Versus the U.S. dollar, the Japanese yen USDJPY, -0.13% was slightly stronger on Wednesday, with one buck buying ¥113.03, down from ¥113.12 late Tuesday in New York. On the month the dollar slipped 0.6% versus the Japanese currency, which tends to benefit from the risk-off market sentiment that was present for much of October on the back of volatile stock market performances.